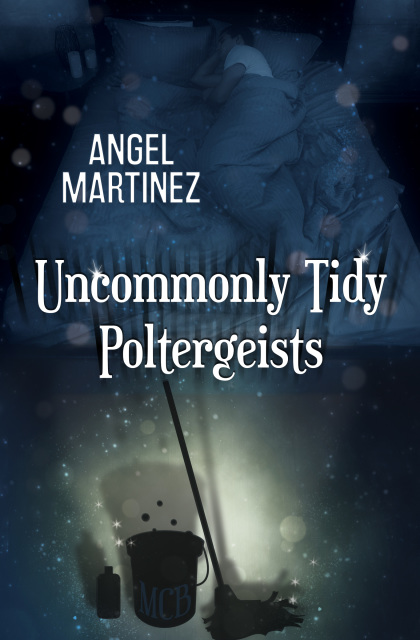 Jack's arrival crushes Taro's hopes of a dashing Van Helsing-style hero. Instead of an invincible hunter, he gets Ichabod Crane. As the paranormal puzzles multiply and Jack begins to suggest the entity might not be a ghostly one, Taro adds a budding friendship with Jack to his pile of anxieties. It's a race to see whether Taro's poltergeist or his relationship with the obviously-not-ace Jack will reach maximum strangeness first.

Taro fidgeted in his chair, as nervous as when he'd confessed to skipping class in high school. A class, singular, but the crushing remorse afterward had expanded it in his mind into a criminal act. The unease was ridiculous now—he had good news to spill—but his stomach wouldn't settle. Everything still had a surreal quality to it tinged with creeping guilt, as if any moment someone would show up and say it was all a mistake or worse, that Taro had unwittingly committed some sort of fraud.

He waited for a lull in conversation, not an easy thing, since both Ben and Luka had brought their families for Sunday dinner. It had been a regular thing years ago for their parents to have the whole family over, but Ray had moved out west, and Ben and Luka had been moving progressively farther away with each addition to their respective families. Now, most weeks it was just Mom, Papi, and Taro, since he still lived in town. Alone. Again.

Once his nieces and nephews had been freed from the onerous chore of sitting at the table with the old people and their moms had followed to referee, Taro made an attempt. "I drove ... down to Dover a few weeks ago."

"To the farmer's market?" Ben said around a mouthful of pie. "Long way to go for strawberries."

Luka gave Ben an odd look. "He didn't say anything about produce."
"Well, no, but why else go all the way—" Ben tried to defend his conclusion-jumping, but Mom interrupted him.

"It was to go to some specialist down there, wasn't it?" Her tone was hard, but there was undisguised horror in her eyes. "Taro, are you sick? Why didn't you tell us?"

"Holy shit," Ben whispered. "That idiot Craig infected you? Should we even have the kids around you? Little germ carriers. That could be bad if your immune system isn't working right."

"So you're a medical doctor now?"

"No, but I treat patients with HIV. I have to inform myself."

Taro folded his napkin into a precise triangle, then successively smaller ones while he waited for his brothers’ pissing contest to die down. Nothing new, of course. Ben was the oldest and always knew best. Luka was the one with the psychology degrees and should've known better. Had Ray been there, he would've been just as likely to egg Ben on as to try to mediate.

"You could all stop making wild guesses and let Taro tell you," Papi said without taking his attention from his pie or raising his voice. "Just a suggestion."

The jumble of voices stilled as if he had bellowed, Ben still glaring and their mother's expression stating quite clearly that heads would roll if she didn't have answers quickly.

"I won the lottery," Taro blurted out.

Luka leaned back in his chair. "Yes. Like why you had to drive all the way to Dover."

Taro cleared his throat. Mom was right. This was a good thing, or it would be if he could rid himself of the nagging anxiety. "I don't usually play. But the Powerball was so huge, I thought, why not? I bought five tickets in Hockessin instead of here because Delaware has nondisclosure. Just in case. When the numbers matched on one, I was excited, but I was sure I'd be sharing the prize with other people."

"Language," Mom snapped automatically, but she was staring at Taro.
"I went to Dover to claim the prize. There were none ... no other winners."

Luka placed a hand on Taro's, ebony covering Taro's copper. It was probably to stop Taro's shaking, though Luka trembled as well. "Tar? How much are we talking here?"