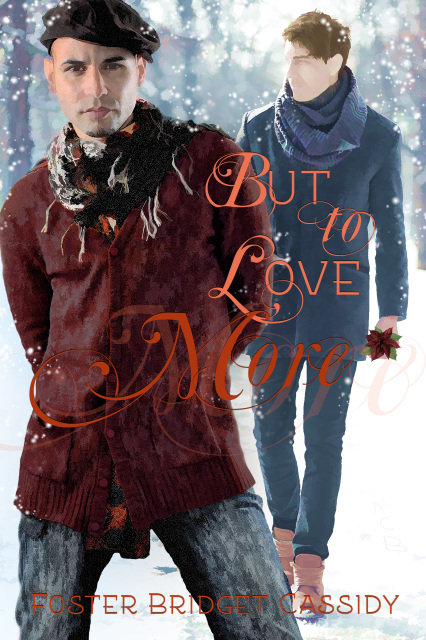 But to Love More

Mel finally gets to go home for Christmas. In his absence, his hometown has changed, and Carlos, his best friend’s little brother, is all grown up and interested in a relationship. But Carlos has his work cut out for him since Mel's having trouble seeing past the little brother part and his big brother, Aldo's determined to keep them apart.

Someone pounded on the door as I spit toothpaste into the sink.


"Hurry up, Mel!" Brian, my youngest brother, bellowed from the hallway.


"Almost done," I called out. I turned on the tap and rinsed my mouth. After washing the toothbrush and putting it in an overly crowded holder, I opened the door.
Instead of Brian bum-rushing me, Sue, our sister, entered.


"Hey, I was next!" Brian yelled, following her into the room.


"Age before beauty," I told them as I passed.


I left them to their petty bickering. Mom would have to separate them before it came to blows. Not my problem.


I went down the hallway to my old room. Becky, my sister-in-law, was sitting on my bed with the littlest one, Lyla, on her lap.


"Just need to grab my socks," I told her, bending over my suitcase.


She nodded and finished tying a bow in Lyla's miniature braid. "There," she said, setting the two-year-old down. Lyla waddled from side to side, trying to get her balance. "Now go find Grandma. I bet she's making pancakes."


The child giggled and ran ungracefully from the room.


I grabbed my socks and retreated after them. I pulled my socks on before turning down the tile hallway toward the kitchen. I hated the cold on my feet. "Morning," Mom called out happily as we entered the kitchen. "Breakfast is ready." Her hair pulled back into a mostly gray bun, my mom beamed. All her kids under one roof again—plus the two grandkids. She was likely high on the familial fumes.


I went to the cupboard and pulled out a mug, ready to start the day with a surge of caffeine. Except the coffee pot was empty.


"Dad!" I spun to face my father, who sat at the head of the table. "You know you're supposed to refill if you have the last cup."


Scanning the area, Chris was nowhere in sight. The bastard. I was forced to change the filter, add the ground beans, and refill the water tank. Not a big deal in the grand scheme of things, but everyone in the family knew to refill the pot. Even Becky understood that, and she only joined three years ago.


While the coffee brewed, I surveyed the kitchen. Becky was sitting with Lyla and Liv; both of the little girls were already covered in maple syrup. Dad scanned his newspaper, his fork held in place a few inches from his mouth. Rocket, the goldendoodle, thumped his tail on the ground in a rhythmic beat. He'd always knew that Dad would drop a few pieces.
"Where's the coffee?" Mindy asked. She leaned against the counter next to me, her protruding stomach looking out of place on her still-thin frame.


Mindy let out a string of curses.


"Hey, hey," said her boyfriend, Patrick, putting his arms around her from behind. He patted her stomach. "You'll have to watch that language around the baby."


She turned and let him have a few choice words. She only stopped when the coffee finished.


I poured a cup and sat at the table. The large plate in the middle had a pile of pancakes plus saucers of sausage and bacon to either side. The girls had a monopoly on the syrup, so I grabbed the tub of butter instead.


Mindy sat next to me and forked several pancakes onto her plate.


"Can Patrick and I come see you soon?" she asked, then took a large bite of her food.


"Course you can. Just let me know when."


"One last hurrah before I pop."


"I've never been to Arizona," Patrick said, leaning over my sister to speak to me. "The weather's nice about this time, right?"


"Really nice. It's summers you want to avoid."


"Maybe we should have Christmas out there next year," Mindy said. "Mild and sunny is so much better than gray and snowy."


"Speak for yourself. I'm sick of all the sunshine. These clouds are refreshing."


"Only ‘cause you don't have to shovel snow," Mindy retorted.


"Neither do you," Patrick said.


She gestured to her stomach. "Well, obviously not in this state. You want me to hurt the baby?"


As those two escalated, Brian and Sue entered, still yelling at one another. Their loud voices added to the cacophony of the chaos in the kitchen. I couldn't even hear my own thoughts. It was just a constant stream of chatter, most of it snippy or sarcastic.


Finally, Chris entered, slipping a cellphone into his pants pocket. He took the last chair tucked between his wife and Dad.


"Why didn't you refill the coffee?" I asked as soon as he sat.


"You could have done it while on the phone. I mean, there's nine of us. We need coffee."


"Right, there's nine of us. I'm sure at least one of you knows how to make coffee."


And then we were going at it, adding to the dissonance of everyone around us.


At the other end of the table, Mom smiled happily.