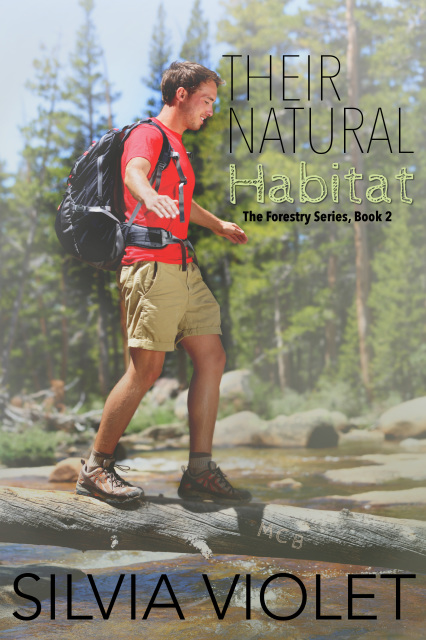 Dan and Parker want a nice weekend away, but bear baiters are camping in the forest where Parker works as a ranger, putting both humans and animals at risk. Dan is worried that Parker will be harmed, angry at their lack of time together, and terrified their developing relationship can’t take the strain.

This is the sequel to Silvia's His True Nature but can be read as a stand alone. If you would like to purchase The Forestry Series, Book 1, you can do so HERE.
Add to Cart

Dan Moore rolled over and reached for his lover, but instead of warm, furry man, he felt nothing but cool sheets. He sat up, rubbing his eyes. When he was awake enough to read the clock, he realized it was only five am. Where had Parker gone? Dan listened, but he didn't hear his lover moving around in the small cabin. Then he noticed the note on the nightstand, illuminated by a streak of moonlight.

Gone to track bears. Be back for breakfast.

He wanted to be the one tracking a bear, a tall, blond bear he intended to pound into the mattress. His dick wasn't happy with Parker's absence, but he tried to ignore it and go back to sleep. After tossing and turning for half an hour, he gave up.

If he couldn't sleep or enjoy Parker's delectable body, then at least he could enjoy the beauty of the Nantahala Forest. He'd taken vacation time because he was going out of his mind missing Parker, but the fact that he also got to see the Smoky Mountains at the peak of fall color was added pleasure.

He stumbled to the bathroom and relieved himself, then he glanced in the mirror. His dark eyes were bloodshot from lack of sleep, but they'd clear. His beard needed a trim, but Parker seemed to like him shaggy so he left it. He walked back into the tiny bedroom and pulled on jeans, a t-shirt, and a fleece jacket. The cabin was bigger than the camper he'd rented last summer, but he still felt like a giant moving around in the small space.

After tying his hiking boots, he grabbed a flashlight. The sun was starting to rise over the neighboring mountains, giving the ridgeline an orangey glow. But the woods were still quite dark, and he'd been warned that the bears were especially active that week.

Dan awakened more fully as he ambled along a trail, breathing deeply of the crisp morning air. Nothing smelled like fall in the mountains, the earthy scent of leaves piled on the ground, the sharpness in the air of winter on its way, and something that spoke of age and solidity and things remaining the same year after year.

When he reached the ridgeline, he stopped and took in the view, the valleys spread before him looked like a painting. For a moment he felt disoriented, as if he'd stepped into a book. The colorful leaves decorating the hillsides in bursts of yellow, red, and orange were a sight he would never tire of. He snapped a few photos with his crappy phone camera, wishing he'd brought along a better one. He vowed to walk up there with his sketchbook and watercolors before he left for home.

Dan took a last deep breath and hoped the day would go more smoothly than the one before. Despite the fabulous sex he and Parker had indulged in, things had been tense between them ever since he arrived. He couldn't seem to relax with Parker like he had during the summer. Dan had been nervous when they'd first met and embarrassed by how incompetent he seemed in the wilderness compared to Parker, but they'd laughed all that off, and Dan had been able to talk to Parker as if he'd known him for years.

Since Dan had gotten to the little town in the western tip of North Carolina where Parker lived, Parker hadn't been the easygoing man Dan had met a few months before. It wasn't just because Parker had been called into work when they'd planned to spend the weekend together. Dan was sure something else was wrong, but he couldn't figure out what had changed.

He turned his back on the lovely view and headed back down the path toward the ranger cabin. Maybe things would be better that morning. Parker should be back soon since most bears did their prowling at dusk and dawn, preferring to keep away from human activity in the daylight.

Dan was lost in thought as he approached the cabin, and he didn't notice the bear nosing around the fire pit until he was only a few feet away.

He froze, his heart banging against his ribs. The black bear rose up on its hind legs and stared at him. Its eyes were so expressive that for a surreal moment, Dan simply stared, taken in by the majestic creature. The bear was huge and bulky, but he could run as fast as a horse and climb a tree with the agility of a cat. The idea of someone wanting to lure a bear day after day with human food, then shooting it from behind while it ate sickened Dan. He was glad Parker was helping to stop such cruelty.

The bear snorted at Dan and his terror returned. What was he supposed to do when confronted by a bear? Running was out. Climbing trees was out. The bear was better at both.