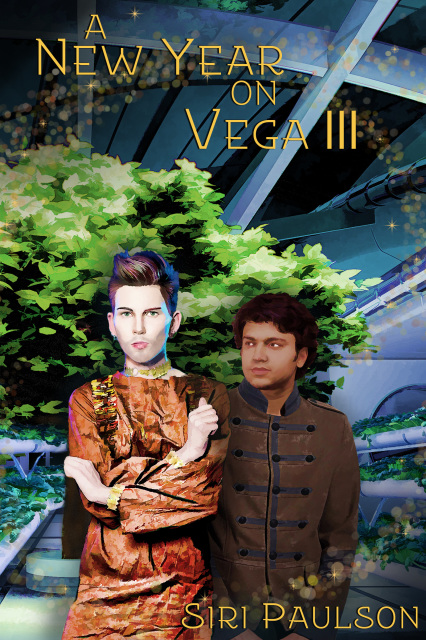 A New Year on Vega III

On the colony planet Vega III, everyone knows Beck—outgoing, fabulous, and genderqueer—and nobody notices Anil, the quiet plant biologist. But when Anil finds Beck hiding in his greenhouse, lonely and missing Earth, it's Anil who is able to comfort Beck by letting them talk about what they miss most—the feeling that comes with celebrating the holidays with loved ones, especially New Year's Eve.

​The two of them are drawn to one another, but both of them are hiding secrets about their sexuality. With trust between them already on shaky ground, Anil's elaborate plans to cheer Beck may well backfire.

Dinnertime on Vega III. Anil could hear the dull clinking of the silicon dishes at the other end of the greenhouse dome, along with the multilingual chatter of the other colonists. Somebody always had to stay with the plants over the meal hour and keep an eye on the all-important nutrient solution. It wasn't an accident that he was always the one who volunteered.

He moved along the rows, adjusting stems of greenery here and tweaking dials there, making notes in his virtual pad, murmuring a word or two of comfort to the plants that weren't thriving as they should. The sounds of dinner faded as he worked his way towards the far side of the dome.

Ahead of him came a scuffling noise.

Darn kids, he thought. The youngest colonists, a couple of female interns from the nearest university, were much taken with each other and snatched every opportunity to be alone.

He came around the end of the row and stopped short.

It wasn't the interns. It was Beck—engineer, genderqueer, more fabulous than anyone else on this planet, and long the subject of Anil's admiration from afar—curled up in a miserable heap on the prefab floor among the fig trees.

He intended to back away quietly, but Beck glanced up and saw him.

"Are you injured?" Anil asked.

Beck shook their head, though their mascara was smudged around their green eyes and their immaculately tailored jumpsuit was rumpled. "Thank you for your kindness, but no. I'm fine."

Anil hesitated. He should leave now, he knew. Beck was always the center of any conversation, vivacious and friendly to all, even the misfits like him. If Beck needed solitude for once, he had no right to stand in their way.

Instead he said, "Need a friendly ear? I promise I won't go babbling." He didn't mention that he had no one to go babbling to. Beck undoubtedly knew that.

Beck wiped at their face, smearing their mascara right across their pale cheeks, down to their five-o-clock shadow. "It's stupid, really."

Anil shrugged, chose a spot a careful distance away, and squatted down on his heels. "If it's upset you, it's not stupid."

Beck rewarded him with just the hint of a smile. But they didn't speak immediately, and he didn't press. Finally Beck said, "You know, I couldn't wait to leave everyone behind. My big, noisy family tried, but they never really understood. I'm not a drag queen or 'confused,' I'm gender-fluid, and even my found-family never got that. I thought that starting fresh on a colony world would be better, and I was right. Nobody here cares if I wear lipstick and a beard at the same time. But...sometimes it's so hard." They sniffed and shook their head. "Hell, I'm sorry."

He wished he could say he understood, that he missed people back home too. But all he could think of was the string of failed relationships. He had to offer something, though, something kind. He settled on, "What do you miss the most?"

"My favorite holiday—New Year's Eve with my found-family in New York. There are all sorts of wonderful traditions I could tell you about, but really what I miss is the feeling of togetherness and belonging and coziness."

Anil nodded. This he could say something about. "One of my friends back on Earth used to call it hygge. It's a Danish word for everything you were describing. Used to be popular slang in the early twenty-first century."

"Hygge. I like that. One of those concepts there's no word for in English. Like the French phrase l'esprit de l'escalier, meaning the great retort you think of when you're on your way down the stairs and it's too late to say it."

He surprised himself by laughing out loud, and was rewarded by something more like a real smile from Beck.

"Anyway," Beck continued, "I know I don't really want to go back. It's not reasonable."

"We're not reasonable creatures all the time, even if we can launch ourselves between the stars. If we were, we wouldn't be human anymore."

Beck nodded, and reached into their jumpsuit pocket to pull out a compact. They flipped it open, peered into the tiny mirror, winced, and dabbed away the worst of the mascara. "Thanks," they said finally, getting up.

Anil got up too. Standing, he was a good ten centimeters shorter than Beck, or four inches in the old reckoning. Being so close to them made his heart beat double-time, but he forced his breathing to stay even. Beck hadn't asked for that, and he didn't want to destroy the tentative intimacy they had forged. Nor did he want to lead Beck on and make implicit promises he couldn't deliver.

"Anytime," he said in as casual a tone as he could muster, and watched Beck walk away.