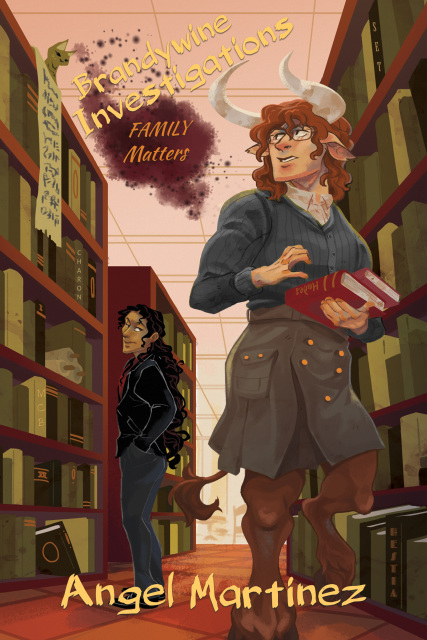 With his career firmly established and his reputation as a successful PI growing, Hades should have the perfect life with his human lover, his faithful ferryman, his dogs and the parts of his family still speaking to him. But murder and chaos are never far away for death lords as his nephew Dionysus and his oldest friend Charon are drawn into the maelstrom.

Please note: Books, Bulls & Bacchanals has been re-edited with a few story adjustments for this edition.

Bloody stones of Tartarus. Who had the balls to be making all that racket at nothing-thirty in the morning?

Dionysus, god of wine, parties, and divine madness, cracked an eye and couldn't even manage a respectable groan. Someone stepping on a broken bagpipe, maybe, but not a nice, masculine groan. The racket nearby was bad enough. The interrogation lights for damn sure would have to go.

Trying to call out for someone was a bust. He wasn't getting past tortured-bagpipe stage yet. He did manage to flop onto his back, his arm falling off whatever he was lying on and smacking something hard.

Another few moments in awareness hell allowed him to puzzle out that the unholy racket was one of his cats giving herself a bath at the end of the sofa and the interrogation lights were bits of sunlight squeezing past the edge of a curtain. His living room curtains. He was fairly certain it was his living room.

"George?" he managed in a croak that would have shamed a raven.

"He's still sleeping, Boss." A lovely face with several eyebrow piercings resolved out of the general blur. "Kind of curled up at your feet on the floor."

"Oh." The lovely vision held a bag of ice to his jaw, which felt better than it should have. "Meghan?"

Meghan frowned as she smoothed back the tangled snarl of hair from his forehead. "You need some water, Boss. And a shower. Bad."

"Too early in the morning."

"It's after two in the afternoon."

She shook her head and offered an indulgent smile as she slid an arm under his shoulders to lift him for a drink. Of water, damn the luck.

He was one of the few pantheon gods who still had direct human worshippers. His groupies really, though Maenads came and went over the years. They wandered into Dio's life when they were young, often alone and desperate. The cliché scenario of families turning on their children when they came out sure as shit wasn't cliché for the kids. The troop took them in, and sometimes they only stayed until they found their balance and moved on. Meghan, bless her, had been with him for nearly seven years.

"Someone clock me?" He shifted his jaw, trying to determine how bad the damage was.

"Hard to say. Things got a little tangled and messy there. Might've even been someone's foot."

Dio lifted the blanket to find he was stark naked underneath, bloody nail tracks decorating his skin like some grisly batik experiment gone wrong. "Good crazy town or bad?"

"Definitely good." Meghan's attention wasn't on his reaction though as she mopped with a wet towel at something on his face. "You need a recap? What's your endpoint for last night?"

At least his blackout was due to a descent into orgy-induced madness and not the violent kind. They'd had a concert, Orphic Egg. He played bass for the band, his brother Hermes on guitar with their friend, Orpheus, as front man and singer. Drums rotated between a handful of trusted musicians, with George on the kit last night. Good crowd, good set. They'd all stayed to dance and party after…

"We went somewhere? Someplace that wasn't the Tar Pit?"

"Rave. Old warehouse. The music, the strobes, booze, you did that thing where you start to dance, and everyone around you gets all grabby." Meghan dabbed at what he assumed were gashes on his neck, since they stung. "Whole place was in orgy-trance state in minutes, you right at the center. Bottle of wine in one hand while you let them rip your clothes off."

"Stayed out of the blast zone, Boss. I was designated spotter last night."

"Ermph." Dio shifted to half recline against the leather sofa arm. Except it wasn't leather under his head. Smart Meghan, putting a sheet under him. "Everyone all right?"

"Yeah. Oh, you know, bruises and scratches. Fiona may have sprained an ankle. Nothing major."

He closed his eyes against the sudden sting. The relief never faded in its sharpness, always, always hitting him brutally as it headed off the rising dread of who did I hurt this time?

"Why're you still with me?"

She laughed, more of a muted snicker. "Oh, so it's one of those mornings. Should I start singing 'As Long As He Needs Me?'"

"Eew. No. You see me as a controlling psycho thug?"

"You know I love you, Boss, and that I'm here to, you know, look out for you and the kids. But I know I don't have to be here."

He nodded, then squeezed his eyes shut again, because nodding was such a bad idea. So many things he should say to her, chief among them being it's time for painted wings and giant things to give way to other toys. Which made him think of Hermes's lover and how Hermes hadn't given up his dragon—and he was thinking in zigzags again.