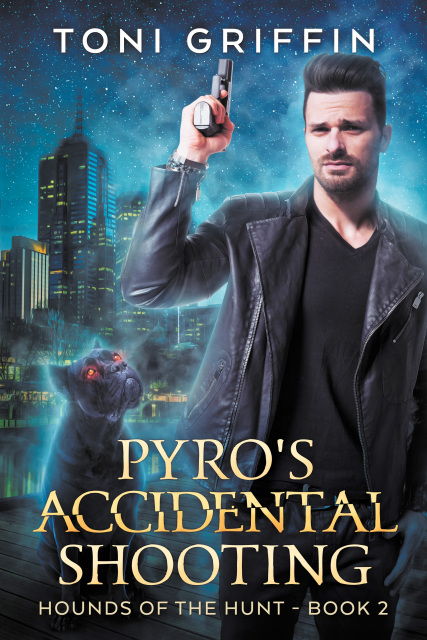 
Winter in Melbourne makes the hunt for supernatural beings gone bad harder than usual during the cold foggy nights. A chill has settled deep in Pyro’s bones. One he can’t shake loose. More than anything, Pyro wishes for a heart mate of his own to come home to after the long nights of a hunt, one who understands him and his desires, who can hold him together when he needs to let go.

Life has always been planned out for Callum. His family of cops expected him to be a cop, so that's what he became. But Callum isn’t so sure about being a detective for the Melbourne police. Not many people understand the demands of being a cop, and it’s been the downfall of more than one of his relationships. Why should his chance of loving someone get sidelined for a job he isn’t even sure he wants?

One fateful encounter on a fog-shrouded night changes both their worlds forever. Now Pyro just has to convince his heart mate they belong together while Callum tries to come to terms with a world he never knew existed and does his best to make up for accidentally shooting the unusual and intriguing hellhound.
Add to Cart

The sun had set hours ago followed by thick fog rolling in. Pyro had never been a massive fan of the winter months, June especially. Coming from Hell, winter wasn't something they'd ever experienced before arriving in Australia.

He thanked Lucifer every day that they had landed in Australia and not some place in the US or Canada. He couldn't even contemplate getting through a winter in Chicago… He'd die if he had to trudge through knee-deep snow, or deal with arctic winds.

Anything yet? Adze communicated to them through their pack link.

Nothing so far, this fog is a bitch though, and making it hard to see anything. Hell, I keep losing sight of Cacus, Daevas bitched.

Pyro had a little chuff at that. He knew exactly what Daevas meant. He'd lost sight of Oriax a time or two himself, but he wasn't about to tell the others that.

Nothing to report from down here, Oriax checked in.

Pyro shivered. Even though they were in their hound forms, their fur was short and therefore they could feel the cold if they stayed still for too long. Pyro wanted to run, but that just wasn't possible right now.

They were patrolling the banks of the Yarra, as they had been for the last three nights. Heavy fog, light winds, and drizzle made for miserable conditions to be out in for the hounds. But it made perfect conditions for their prey.

They were currently hunting down a bäckahästen, a horse-type creature that appeared near rivers in foggy conditions. But unlike horses, they had sinister motives. They were a bitch to handle in the winter months, a one-two combo of wet and cold. Their quarry would lure nearby people to her with whinnies for help, and once they climbed onto her back they would be unable to get off again. With her prey captured, the bäckahästen dove back into the river and drowned the poor victim.

Four people in the last week and a half had been fished out of the Yarra. Hence, why the hounds were scouring the banks of the river for the bäckahästen. For the balance to be kept between Heaven and Hell, each realm could allow only so much mayhem. And while a bäckahästen was older than any human concept of Hell, she was an easier creature for the hounds to deal with than anything Heaven might send along.

You call a twenty-kilometre diameter along the banks of the river with the city at the centre a 'localised killing ground'? Oriax asked in disbelief.

Pyro laughed. Yeah, I do. Especially when you consider the Yarra stretches on for over two hundred and forty kilometres.

Yeah, okay. I guess you have a point, Oriax conceded.

Unfortunately, bodies had been found in both directions from the city, so they were patrolling everything they could.

The conditions had been miserable since it had become safe to do so. That was one good thing about the fog. As awful as it was to try to hunt their prey in, it did supply them with a level of cover they didn't usually enjoy.

Oriax and Pyro started at the SeaLife Museum in the city and were working their way east/south-east, which he was pretty happy with. Pyro thought they had the easier of the three sections to cover. Cacus and Daevas started at the same place, but were tracking the Yarra south-west. He felt sorry for Adze and Nicor, though. They had the worst of the three. They were starting at Pyro and Oriax's finishing spot at Chapel Street and were following the river through to the Burnley Campus of Melbourne University. All those teenagers and young adults, even at this time of night. Pyro shuddered.

Hidden behind the dense layer of fog to their right were Melbourne's sporting stadiums. Rod Laver Arena, the MCG and AAMI Park all sat quiet and still on this Wednesday night. Come the weekend, two of the three of them would be packed to the gills with sports fans as they cheered on their favourite teams.

The last thing they needed was for the bäckahästen to still be prowling for victims for a second weekend in a row.

If she brought more attention to the supernatural elements the humans choose to ignore, it could get ugly. Too much chaos and blood would have the humans looking a little too closely at the shadows. Heaven had their squads for amok extremists, Hell had theirs. When one of their jurisdiction got too greedy, which seemed to happen more and more with beings from all different realms, the hounds were called in to solve the problem.

Light pierced the fog every now and again as cars travelled along Batman Avenue. The sound of rubber tyres speeding over the damp bitumen broke the silence around them.

On the other side of the river the Melbourne Botanic gardens stretched out covering thirty-eight hectares of land.

Ideally, both sides of the river would be covered. But with just the six of them and such a large area to patrol, they couldn't split up any more than they already were. Unlike some of the other creatures they kept the world safe from, two hounds could take on a bäckahästen by themselves.

A soft sound carried on the breeze caught Pyro's attention. He paused, Oriax beside him. His packmate's ears were perked up, just like his own, listening for something, anything.

The gentle rain had long since soaked through Pyro's short fur coat, and had chilled him to the bone, but he took little notice of it now. Pyro had learned decades ago the art of ignoring things that made him uncomfortable while performing their duties as hounds.

Slowly, they started making their way towards the noise. One careful step at a time. They weren't too worried about making alerting the bäckahästen to their presence. The ground, and everything on it was wet, meaning no crunching leaves under their paws.

The sounds from the occasional cars on the road filtered through, and the breeze blowing through the trees. A soft whinny called out to them, scared, deceptive. Pyro wanted to curse his fate. Of course, it would be his luck that he and Oriax would be the ones to find the damn bäckahästen.

We believe we've located the subject, stand by for confirmation, Pyro reported through to the other two groups.

They slowly and carefully made their way along the shore of the Yarra, tracking every little sound they could, ignoring the calls for help from her. The fog began to lessen in sparse patches, allowing Pyro and Oriax to actually see for some distance for the first time in hours.

Shrouded in a cloud of mist, blending in like a bitch, stood a pure-white horse. But she was no horse, she was a creature foul and twisted, murdering for fun. Her head lifted towards where the moon would be, if they could see it, calling for more victims. The long white strands of her mane and tail floated in the gentle breeze, unnaturally so. The creature looked majestic as fuck. Too bad she was luring unsuspecting humans to their death.

We've got a visual on the bäckahästen, Oriax notified their team.

Copy that. Cacus and Daevas, head back to the penthouse. Nicor and I will head your way. Where are you exactly? Adze asked.

Glancing around, Pyro thankfully recognising enough little things through the fog that he had a fair idea where they were.

We're on the shores just below where Batman Ave becomes the M1. AAMI stadium is just on the other side of the highway.

Got it, we're on our way. Adze informed them.

What is it? Adze enquired.

Human, out for a late-night jog, Pyro reported.