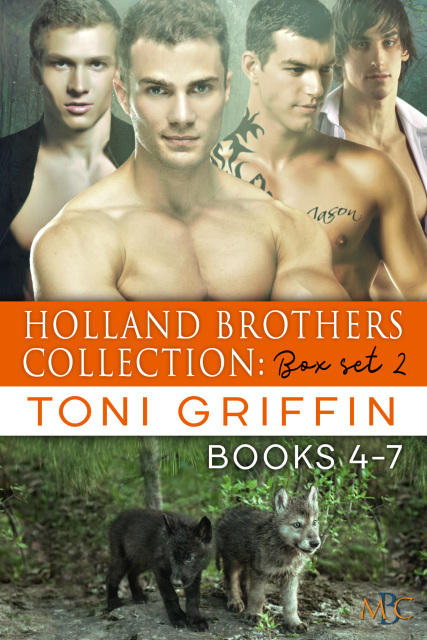 Tucked away in Leyburn, Australia, the Holland Brothers have been spending their time with friends, family, and pack. With three of the brothers happily mated, Patrick works to keep his distance from the mate who rejected him—resigned to living half a life. But Fate has other ideas.

Finding his mate should have been Patrick Holland's greatest day, instead it turned into a nightmare with one phone call. His mate didn't want him. His heart broke, but at sixteen he was too young to do anything. The next ten years—ten long years— of Patrick's life are spent at odds with his mate. Split by forces he can't comprehend and a long line of misunderstandings, Patrick doubts he'll ever get the man he's both loved and hated.

Jake Richmond never expected to come home from Uni to find the youngest Holland brother was his mate. Knowing the news might uplift his still grieving father, Jake shares the news only to have his young mate threatened. Jake does the only thing he can think of, protect Patrick. The next ten years are nothing but torture for Jake as he watches his mate grow into a remarkable young man.

They say time heals all wounds, but how much time?

Marcus and Brian celebrate their first anniversary together.

It's Christmas time for the Hollands, and everyone is bustling about preparing for the coming festivities. As Marcus, Alex, Simon, and Patrick try to make time for their mates, they feel the pressure to make everything perfect. Thankfully Maryanne has the solution. However, they forget one important detail, leaving them scrambling at the last minute to prevent a Christmas disaster.

Jason gives Alex the best birthday surprise an Alpha could ask for.

Hayley has a special request from Simon and Zack.

Jake and Patrick steal a moment for themselves from the ensuing chaos of house renovations.

Valentine's Day is fast approaching and with it the completion of the renovations to their home. None could be happier about this then Zack who can't wait to get away from Maryanne and all her fussing.

Plans are being finalised for all four couples for the happy day. However, sleezy tradies, an over protective mother-in-law and unexpected complications throw spanners in the works.

A WOLF IN COP'S CLOTHING

Marcus Holland loves his job as a small town cop and his life with his pack. When his mate, Brian, kissed him goodbye that morning and remarked, "This is Leyburn. What trouble could I possibly find?" Marcus really hoped never to find out. He had no idea how much those words would come back to haunt him as he goes about his duties.