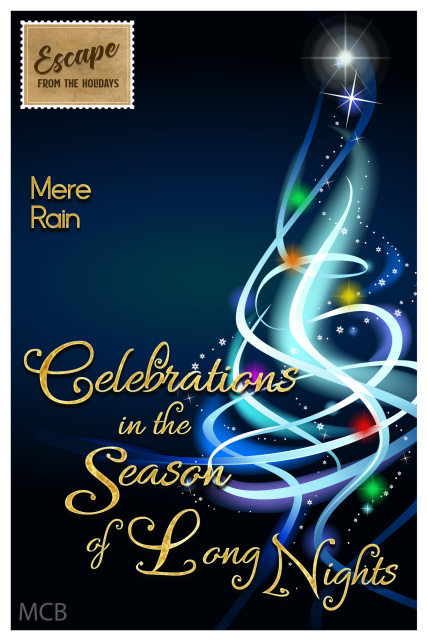 Celebrations in the Season of the Long Nights

Escape from the Holidays

Having escaped his abusive family by winning a scholarship to college, Shahin promised himself he would never go back. So when his plans for winter break fall through and he’s left homeless for a month, he decides he’d rather camp in the park than go home. But he doesn’t realize it's the solstice, the longest night of the year, the start of the season when the supernatural is at its strongest.

Yima is a demon-hunter, a duty passed down through his family. He doesn’t resent it, but it does get lonely, especially since his work is at its most difficult and dangerous when everyone else is celebrating with family. After he rescues Shahin from an demon attack and finds that he has nowhere safe to stay, he takes him back to his flat. He just arrived in town and hasn’t even gotten the electricity turned on, leaving the two men with little to do but talk.

It isn’t a surprise when they end up in bed, though what at first feels like a temporary comfort grows over days spent together into a deeper bond. Nomadic Yima has to find a way to stay without demons coming after his lover, and Shahin has to decide whether he can risk his heart loving a man who constantly puts his life in danger.

Part of the 2018 "Escape from the Holidays" Series

Burning Down the House by Gregory Norris

The Holiday Spirit by Carole Cummings

Celebrations in the Season of Long Nights by Mere Rain

Something to Celebrate by Evelyn Benvie

Waiting on the Rain by Freddy Mackay