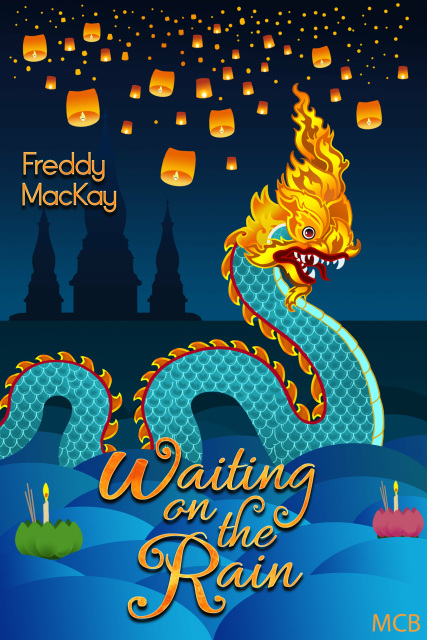 Waiting on the Rain

One young man desperate to make things right for the monks who raised him. Another looking to escape the limelight. The two best friends stuck in time because of promises.

A couple looking to make a bigger unconventional family—one young woman who wants to help the world become a more beautiful place, one transwoman looking to put down roots for the both of them.

Love isn’t always easy, but the good kind is worth fighting for, even when others don’t understand it. The story of what becomes of their love is what will be passed down into legend. Because stories like this, people remember.

When Jira, Boon, Areeya and Fon come together to celebrate Yee Peng and Loi Krathong, sparks fly and dreams coalesce. But that’s only the beginning…

Heat battered against Jira as he scanned the crowds. Waves of people and cars hurried along the sidewalks and streets, the masses expanding and ebbing in a natural rhythmic cycle all cities had. Too many people and not enough space. The decibel level, in conjunction with a pounding sun overhead, made it hard to focus. Despite it being the end of the rainy season, nature had missed the notice to cool things down.

Rain had been in little supply this season.

Jira checked his watch. Eighteen more minutes, then he’d have to give up his vigil for Boon for the day.

There was still tomorrow and the day after.

Every year it was the same—hope and fear warred within Jira’s chest, making him giddy and nauseous. Hope that Boon would make it back to Chiang Mai for the celebrations this year, fear he would not. In the ten years since Boon had moved to Bangkok, he had never once failed to honor the drunken promise they made when they were boys.

Not yet. But there was always the possibility of the first time. With Boon’s career taking off, the inevitable day was coming fast, and when it happened, Jira’s heart would break.

To always remain friends, and they affirmed it by meeting at the west gate, Suan Dok, just outside the old city for the year-end celebrations. Jira would wait there for Boon every day between ten and eleven in the morning, holding vigil until they met again. Those were the only two constants set—the timeframe and where.

Even with the phone calls, email, LINE, WhatsApp, Facebook, and Skyping between them, the year-end celebrations were the one thing Jira and Boon never talked about.

Never once had they set a day. Never once had either of them said they wouldn’t meet. It was as if they had an unspoken agreement between them to never discuss it, like the spell would break if they did, and all they needed to do was trust in The Promise.

Yes, some years were better than others. Sometimes Boon could stay throughout the Yee Peng and Loi Krathong festivals. Sometimes he only made it for a day, just long enough to release a krathong and a khom loi, then hurry back down south. But Boon always made it home.

Times like this, where Boon hadn’t shown on the first day, Jira always worried it would be the year The Promise got broken. They had been sixteen. Boys who dreamt big and were more than a little naïve about the world and its ways.
They had believed anything was possible, and that they’d always be friends no matter what—the memories of back then a haze of fun-filled days with no limitations.

So young. So frighteningly young the two of them had been when they'd sworn they’d always be friends. Heh. Friends. A trap that promise was. Not that they were particularly old at twenty-six, but they had grown up.

Life happened. As it did. Changes big and small affected them both.

It wasn’t as if Jira could blame Boon for not making it home. He understood the pains of being an adult and commitments. Work. Endless days of trying to make ends meet and still make his dreams happen.

Like helping the monks who had raised Jira. The monk. Stubborn old man that Phra Suwit was.

That mess was a massive headache, but he would never let down the men who had taken care of him when no one else had. They had given him a home, his art. The least he could do was make sure the wat was taken care of now.

There were days, weeks, or even months when Jira had trouble believing he could be anything more than a failed artist. So innocent he’d been. Thinking his voice was so important, his art so different—that people would listen. That what Jira created made him special. Ha. No. Not that he had stopped trying. Not yet. But there were days… Even now, with the bank breathing down Wat Phra Naga’s neck, his art did nothing to help the monks.

A fool. That was what Jira had been. He had never been anything like Boon. Beautiful. Intelligent. Funny--Boon.

Sweat pooled down Jira’s forehead, hung under his chin and scruff, then dripped down his chest. It bled through his shirt—the sun unrepentant on this hot November morning, harsher than usual. The small bun of hair clasped at the nap of his neck itched against his skin. He pulled at the wet knot and a couple of locks swung into his face. While the reptilian side of him appreciated the heat, it was possible to have too much of a good thing. Standing here as a human could make Jira pass out. If only there were more trees.

At least they had been ‘smart’ enough as boys to pick the west gate and not the east gate, Tha Phae. Not that they could’ve predicted the interest the gate would garner. Jira shuddered.

What a tourist trap these days. One movie and people crawled all over to find the perfect selfie. The reconstruction only drew more people to it too. He’d never find Boon there. Or rather, he would and not be able to get to him. Too many people would recognize Boon if he stood around too long.

The problems of success—hordes of people wanting a selfie or autograph or the occasional grab for hair. Ick. Not that Jira would know. He sighed. Now he was getting irritable. Last thing he wanted to do was make Boon feel bad about his blessings in life.

Sweat continued to trickle down Jira’s neck and into his T-shirt, making it cling to his skin. He pulled at the fabric, seeking temporary relief from the discomfort. Jira glanced to the right, wondering if he should seek refuge under the canopy provided by large trees farther down the wall. But if he moved, then he ran the chance of missing Boon or Boon wouldn’t see him. Jira's breath caught. He never wanted his best friend to think he’d broken their promise. No, he’d wait in their spot.

Carefully sculpted bushes dotted the ground in front of him, flowerbeds, and lattices, and farther in the distance loomed the mountains. Not a speck of shade. Nothing. All the trees? Either to Jira’s right, closer to the water, or on the other side of the entrance giving their welcome shade to the south end of the gate.

It had been an easy spot to pick when they made the promise. A large, white derelict shophouse loomed behind the thick-walled entrance, the rough, russet colored bricks a stark contrast to the modern buildings made from concrete. The entrance was a remnant from centuries ago, the last defense—a moat and the wall. A well-known location, not too busy.
Now tourists fawned over it, took their pictures, then continued on into the cramped quarters and twisty roads of the Old City. Unlike Jira who stood just outside, waiting on a promise.

Waiting underneath the sun-filled sky like an idiot when he should have been working, trying to earn money to help the monks at his wat. If only it would rain, then the heat wouldn’t be so bad. The smog might actually clear up too. Chiang Mai, all of Thailand, could really use a good rain.

Jira’s legs ached from standing for so long. He considered plopping down on the grass, but then he’d probably be told to move along. So many cops were out patrolling the Old City. The crowds for the festivals made them necessary, but they were just as cranky as the next person.

All of them waiting on the rain that hadn’t come. Again.

The unusually high heat pounded down from all around them, dampening the normal jovial, festive atmosphere. The swing in Celsius had caught everyone off guard, the mid-thirties unexpected from the normal mid-twenties. Tourists and Thais alike sought air-conditioned retreats and the shade. Unlike Jira who stood under the sun watching the traffic whiz by, wishing he had packed another water, wishing Boon were yelling hello.

Eleven. On the dot.

A wave of disappointment knocked against Jira’s chest, but he shut it down, swallowing hard and taking a deep breath in before slowly letting it back out.

Tomorrow. There is still tomorrow, he reminded himself.

The festivities still had one more day, and it wouldn’t be the first time Boon had rolled in on the last day.

Problem was, Jira couldn’t help feel like this year was different. Something had changed.

Jira adjusted the shoulder strap on his backpack, gave the road and surrounding area one last wistful sweeping glance, then made his way to the sidewalk. He’d catch a Red Car home. Work waited for no man. If Boon wasn’t coming, Jira had commissions to finish and a shift to pick up at his friend’s bar. Nights like tonight, both festivals in full swing, there was too much money to be made with the tourists out and about.

“Kor tod khrap. Kor tod khrap,” Jira said as he weaved in and out of the clumps of people.

Tourists who made it hard to stay on the sidewalks. Jira hugged the sidewalk edge precariously, his feet awfully close to the red and white stripes warning pedestrians and cars alike about the danger.

The press of bodies made the heat worse. Made Jira desperate to get away from the Old City as quickly as possible. Too bad the gates made such a convenient location to meet.

Ten years ago the streets weren’t so crowded.

More and more tourists streamed into Chiang Mai each year to participate in the celebrations. Businesses and the temples adjusted accordingly—like the Thais always do. It was hard to complain when the money helped everyone.

Times had changed. Maybe it was time for Jira to let go too. To let Boon out of the promise they had foolishly made. The thrill and anxiety of the yearly promise wasn’t good for him—and Boon had a life. A career. Success. Jira needed to accept his lot in life and grow the fuck up. To figure out a better life for himself.

Jira just had to be like everyone else. Adjust to the new reality. Accept his reality. He weaved through the crowd, brushing past people, trying hard to keep the heavy weight on his chest from toppling him over. No way would he cry in front of strangers. It was ridiculous anyway—crying because his best friend hadn’t come.

“Kor tod khrap.” Faster. He needed to get away faster. Home faster. Recover.