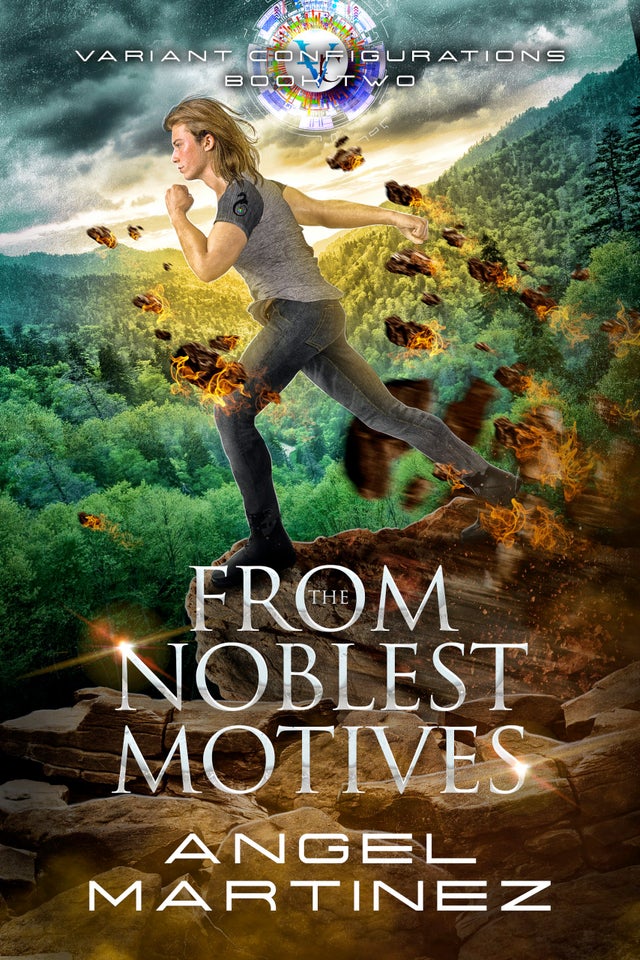 From the Noblest Motives

The Fredamine Project was just the beginning. Shadow dealings and conspiracies regarding variants intertwine until Damien and his cohorts can no longer tell who the bad guys are.

Several months have passed since Blaze and the infamous Variant activist Shudder McKenzie helped Damien rescue the captives of the sinister Fredamine Project. Professionally, everything's great. He's back to working with Damien again and they have a new lead on the three kids who are still missing. Personally, not so much. Blaze has made his peace with Shudder, though nothing between them has even been easy, but his relationship with Damien has taken several steps back. Blaze no longer has any idea where he stands. Adding to the tense atmosphere are the anti-Variant members of legislature who have been slowly gaining popular approval, and the cryptic messages Damien receives from an unknown source.

Shudder's back to his old haunts and his old tricks, trying to raise public awareness of imperiled Variant rights—such as the draconic Horace Act that strips due process during Variant trials—and to rescue Variant kids in trouble. His almost mythical luck runs out though when he's arrested for murder only three days after the passage of the Horace Act and a whirlwind trial and sentencing lands him in the most notorious maximum security facility for Variants—San Judas Tadeo.

With too many conspirators on both sides of the aisle, Damien, Blaze and Shudder no longer know whom to trust. Peeling through the layers of deceit and half-truths puts them on shakier ground with every discovery and in greater danger than ever before.

Variant Configurations takes place in a future Earth where humanity is reclaiming its spot in a gradually healing world. This book contains mentions of past abuse, action-adventure style mayhem, and the sparks of a slow burn, series-spanning relationship.

The Wind River Range dominated the view through the windshield, a series of blunt teeth from this direction, like the lower jawbone of an impossibly huge, extinct herbivore. The evening sun tinged otherwise forbidding gray stone with carnation pink and brightened the last bits of snow on early summer peaks. Damien mentally traced the edges of pink along the western edges, snow to stone. Pink icing on pink cake.

His thoughts snagged and he frowned. Most of the cakes in his limited experience—provided by Dr. Parma who had fostered him from age ten—had been yellow with chocolate icing. He'd loved those, so that's what she gave him, and he hadn't paid much attention to baked goods past that. "Are cakes ever pink?"

Beside him in the driver's seat, Blaze snorted, the sun raising sparks of gold in his red hair. "Every time I think I'm starting to figure out how your twitchy brain works."

Damien tried to smooth his frown, certain it hadn't worked. "Are they?"

"Sure. Cake could be any color you want. Pink. Blue. Black. Some chartreuse hideosity."

One corner of Damien's mouth tugged up as he slid into Blaze's favorite game of obsolete words. "Gingerline."

Damien slid his eyes toward the left without turning his head. "That's not a color. Or even an obscure word."

Blaze nodded, far too serious. "I know. Just like the way it sounds. Like some big, long-legged water bird."

"Like some fucker who thinks too much of himself."

"Like that weird cream thing people pour alcohol into for the holidays."

A choking laugh got away from Damien before he could catch it. "You mean eggnog?"

"Ha." Blaze's grin rivaled sun on snow. "A laugh. One that sounded like the air being let out of a tire, but I'll take it."
The warmth spreading out from under Damien's heart was familiar. Both comforting and distressing. This, driving with Blaze, the effortless give and take, was too easy to slide back into. He'd missed it with a heart-constricting ache, and he'd told himself for the past three months that he shouldn't, could not, miss it.

And still, here we are again.

Three months alone at his isolated cabin in Vermont. Three months to think, to process, to try to smooth out the desperate mess of his thoughts. Through the slow melting of winter and the first tentative green of spring, though, he hadn't untangled himself from the previous job—from Blaze, from Shudder, from the exhausting and knotted-up search for forty missing variant children. Physically, he had recovered. His mind hadn't managed to stop picking at all of it for more than a handful of minutes at a time.

Not that three months was nearly enough time to forget, but he'd hoped for some distance, some clarity. One thing had become painfully clear, though— how deeply the job had affected him and disturbed his peace. Before, settling back into the rhythms of life alone had been easy, but after his last return from Raleigh, he'd been restless, both melancholy and agitated. He told himself again and again that his retreat had been for the best, but he'd no longer found any peace in solitude.

He'd… missed things he never had before. Conversation. Touch. Companionship.

Blaze. He'd missed Blaze and on nights when he was brutally honest with himself, Shudder, too. He'd retreated to his cabin to let go, to be sure Blaze would be able to let go, and for his part, Damien had done an absolutely terrible job, the complete opposite of letting go.

When Dr. Parma had sent for him, he hadn't hesitated. It only made sense to have him continue the job he'd started rather than bring in someone new—and when he'd reached the conference room, there was Blaze. Big, beautiful Blaze with his cocky smile and his boots up on the table just like the first time they'd met. For three stuttering heartbeats, Damien had frozen while part of his brain tried to convince him to run away, scrabbling in the corners like a terrified rodent.