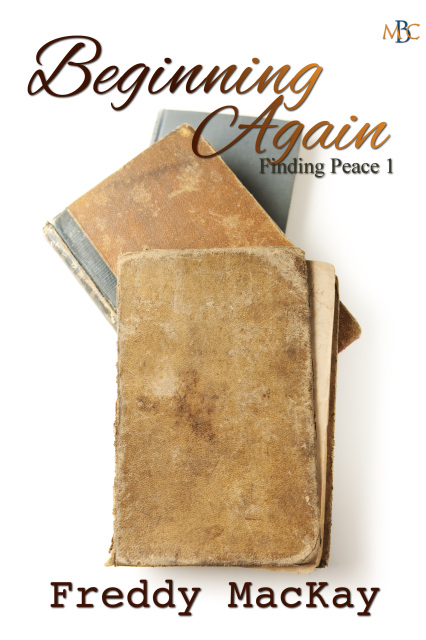 Months after waking from a car accident that took everything David held dear, he's trying to settle into a new life at CRU. There's only one problem. Well, three, his roommates: Bobby, Chris and Austin. They want to experience life now that they're out from under their parents' watchful eyes, and for David to partake in the fun with them. David feels he's experienced enough life already and just wants to be left alone.

Bobby sees how David watches him, Chris and Austin. He's convinced their hard-ass roommate just needs a little nudge and David would open up. When Bobby comes back to the dorm unannounced, looking for an English paper for class, Bobby finds out why David's been holding them at arms length and becomes determined to help his roommate  rejoin the world of the here and now.

The only problem is: David has more secrets he doesn't want anyone to know about.

NOTE: There are references to rape, and some graphic violence, in the story.

PLEASE NOTE: This title was previously released under a different publisher. This is a reedited second edition.
Add to Cart

Junnosuke Ito stared at one David McCourt. The young man sitting in front of him had asked to work in his Biochemistry lab at the university. Dumbfounded and confused—though Jun could never admit to such a thing—he'd swear up and down David looked exactly like Absalom Feld. Jun's driver's license stated his age as fifty-two and Abby would be the same, but the uncanny resemblance his interviewee had to his friend shook Jun. The bright blue eyes, David's thick and wavy dirty blond hair, the lithe build, his average height—all of it, a perfect carbon copy of the friend Jun had lost so many years before. They were so similar Jun almost caught himself calling the young student by Abby's name.

Jun's heart ached and his fingers twitched. He wanted to call Henry Wilson and tell him about the young man in front of him. Henry, Jun's best friend and confidante since Abby's disappearance, was the only other person who had gone through the same loss and pain he had. Henry carried the same gnarled wound that dug into Jun's chest, the one flaring incessantly as a reminder of his mistakes as he looked at David sitting across from him. Only Henry would understand, but Jun couldn't call, not before David left.

The professor listened to David talk about his research and why the young man wanted to be in his lab. Jun nodded at all the right intervals, but he struggled underneath his cool façade. Flashes of Abby slammed into him, making Jun think about how he hadn't done as much as he could have when his best friend's relationship status had been repeatedly rejected and denied by Neil Cook, the fourth member of their close knit group. Jun watched his blond friend go from smiling, loving, and slightly clumsy when they were undergraduates, to quiet and reserved in graduate school. All of it, the whole transformation, just so Abby could hang onto Neil.

But Neil, now the university's president, never acknowledged Abby as the love of his life. Henry and Jun blindly believed things would change. They did. Abby and Neil's lack of a real relationship got to the point where Abby just up and disappeared one day, not long after an incident at a nightclub, an event that left Abby with broken ribs and a black eye. Henry and Jun's friendship with Neil splintered after Abby disappeared. They went their separate ways, promising to never speak with the man again, only to be thrust back together when Neil took the head position at Capstone Ridge University, better known as CRU. A hiring choice Jun fought against, but lost. He did not want his one time friend coming back to his beloved campus. Reconciling with Neil would never happen. When Abby left, the friendship between Jun, Henry, and Neil fragmented, permanently and irrevocably.

Now with David talking enthusiastically to Jun about his research, the past came up and hit him in the stomach, kicking him in the ass when he went down, laughing and taunting him as a world of renewed regret piled back onto him. Jun lost himself in his thoughts until the young man cleared his throat and looked meaningfully at him. Concern and resignation marred the young man's clear blue eyes. Jun returned his steady gaze to David, attempting to clear his thoughts of a friend lost but never forgotten.

"I'm sorry; you said you're a transfer?"

"Yes, I'm starting here as a sophomore after getting accepted from a community college in Flagstead."

Jun looked down at the resume and transcripts David brought with him and nodded, hearing the young man but still struggling with containing his emotions. "So why did you pick CRU?"

A weak smile crossed David's face, one Jun had seen on Abby many times, and Jun's breathing nearly stopped. The slight curve on David's lips didn't show happiness, but loss and misery. Even though the young man grinned, it never managed to reach his eyes—blue eyes desperately trying to keep up appearances and not let any emotion through. But Jun noticed. He had firsthand experience with those kinds of feelings and the fact they came from someone so similar to his missing best friend did a number on Jun.

"I'm not trying to pry, I was just wondering why our science program stood out to you over the other universities," he said softly and pointed at the transcripts. "Your grades are excellent."

David shrugged, wariness filling his face. "I like the Biology program here and the research the university is doing. The college in Flagstead is more of a liberal arts school, easy going and open-minded, but I'm a science major, not an art major. Besides that, it was an economical decision. Paying in-state is a lot cheaper than going out of state."

Jun had to agree. "Yes it is, but CRU isn't exactly an open-minded school."

"No. No, it's not," replied David, a look of irritation crossing his face. "But this one was close to home and it has the specific program I wanted."

"Yes, I'm sorry, you mentioned that," said Jun as he racked his brain, the shock of seeing an Abby-clone affecting him to his very core. Did he even make any sense at all at this point? "CRU is a wonderful school and I'm sure you'll enjoy your time here."

"I hope so." A pained expression flittered across David's face. "My family was really excited when I got the acceptance letter."

"Then you'll have to make them proud, won't you?"

David visibly paled and pulled a tight grimace that was probably supposed to be a smile. "Yeah, I guess I do."

"So, would you like to see the lab?" Jun pushed back from his desk, knowing he should think the offer through a little more, but he couldn't stop himself. He needed David close by, to be able to keep an eye on the kid, to make sure nothing bad happened to him.

Maybe he could atone for the mistakes he made with Abby.

Shock filled David's eyes before he stammered out an answer. "You mean I have the job?"

A grin tugged at the corner of Jun's lips. He knew his reputation, what the kids said, about how hard it was to get accepted into his lab. Obviously David had heard the rumors, too. The look of disbelief spoke volumes. David had not been expecting to get the lab assistant job offered to him on the spot or at all.

"No problem, I think I've seen enough to know a good thing when I've found it." Jun opened his office door and waved for David to follow him.

A faint tint of red appeared on the young man's cheeks, reminding Jun even more of Abby. A sharp tug pulled in Jun's chest. He very much missed his old friend, and with David around, a constant reminder would be walking around the lab daily. Jun shook his head. The minute the boy walked through his door Jun knew he wouldn't be able to let go. Abby was gone and this boy was so very much like his long lost friend.

Jun took a deep breath, trying to calm his racing heart, knowing he needed to call Henry once he showed David the lab. How would he explain Abby's ghost showing up on his doorstep?