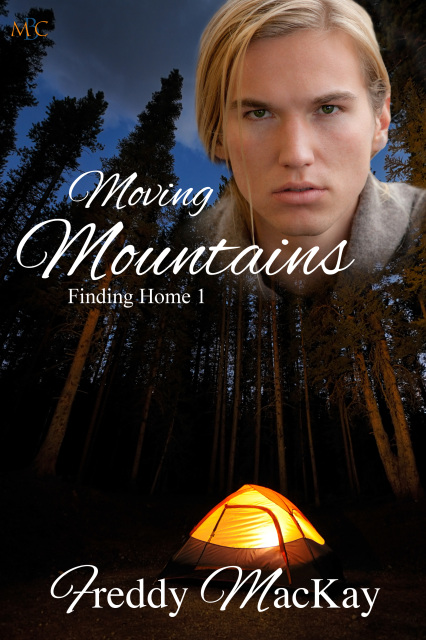 Nerd. Geek. Dense. Stupid. Social reject. George had heard it all growing up. Being an Aspy, a person with Aspergers, he had gotten used to never fitting in and not understanding people. His doctorate became his life, and unexpectedly, so did a fellow grad student in his lab. But when the relationship ended with George getting dumped unceremoniously by email and left to handle the gossip alone, George wasn't sure his heart could handle being in a relationship again and decided it was best to focus on his thesis.

A year later things hadn't changed. Well, except a restlessness eating away at George that had started six months earlier. A field research trip to gather more data might just be the thing he needs. Luckily his friend and lab assistant, Max, is out in the field with him. Little did he know this trip would change their relationship permanently, something his heart might not be ready for.

Please Note: This title was previously published with another publisher. The only changes made were edits.
Add to Cart

As the gray-tinted clouds rolled in over the deep blue-green lake, George Sanders watched warily, trying to decide whether or not to go back to camp to put a tarp over the tent. The weather had been nice all week and it seemed a shame if it turned, but gazing at the downy wisps of white, they looked to be the stratocumulus type, meaning he wouldn't have to worry too much. He could take his time wandering by the open water, enjoying the breeze while green fir, spruce, and pine trees towered over him everywhere he went. The lake and forest constantly made George feel exposed but closed in all at the same time, the contradicting atmosphere in tune with his own struggles and insecurities in his life.

Taking a deep breath, George carefully walked on the outlying rock, keeping an eye on the distant mountains and wondered if there was still time to visit them, maybe get lost in the far-off peaks for a little while and come back put together. Being outside, surrounded by nothing but the gentle wind and the solitude of nature helped him find peace, something he hadn't felt for the last six months. Heck, the last year if he was honest with himself. But yeah, the last six months had definitely screwed with him.

At first, just a little niggle of self-doubt had planted itself in his head, but then constant irritation harbored deep inside George until he couldn't sit still and do nothing anymore. Something had changed, he'd be damned if he knew what though. The feelings made George run around in circles trying to figure out what bothered him. It made him hate not being able to understand feelings the way other people could.

As an Aspy, a person with Aspergers Syndrome, George spent a lot of time on the outside looking in. He tried his best to mimic the correct responses when needed, and was considered by many to being high functioning autistic. In fact, most people thought he was just quirky. There were times he failed spectacularly, but it usually didn't bother him. This time though, he felt defeated and confused. The uncertain emotion bothered him, ate away at his world. George wanted it to stop.

George looked up at the sky again, watching the clouds. The constant unrest upset him more than he cared to admit, but the other grad students had picked up on it, staying scarce when he came in to the lab and offices. Even Dr. Evans shared his displeasure with George right before he left on his latest data collection trip.

Since he'd been so persnickety everyone probably felt relieved George's research for his thesis brought him out into the field for weeks at a time, only getting a lowly lab rat—aka lab assistant—for help on occasion. This time around, no one else had even offered to help him, except for Max Flint. Max had been a friend and lab assistant since his freshman year, the same year George started grad school, at Capstone Ridge University—CRU to the students and staff—and would be leaving after the summer to go off to his own grad school program. George would miss the guy something awful once he left. And remembering his friend had been behind him, George glanced over his shoulder, looking to see if the eager new graduate still followed him, weighed down by carrying supplies to check out their weasel—aka stoat—families.

Bright orange curls bobbed freely in the breeze, even with the bandana tied around Max's scalp. George laughed. Max could never keep his hair under control. The guy should just shave his head. Not that George's blond hair did any better, always getting tangled up despite the ponytail he put it in. Suddenly, Max looked up, smiling. His bright hazel eyes glowed with satisfaction. Why, George had no clue, nothing about this trip had gone as planned with the exception of being able to relax in the great outdoors. And at the moment, being surrounded by the forest was George's only saving grace in his current state of unrest.

George smiled at the familiar nickname. Max was the only one who called him that. George had always wanted to ask why Max emphasized 'Gee'-ves instead of 'Jah'-eeves, but could never find the courage to ask. He waved Max off.

"I hope so." George shook his head. "I don't understand how we could lose her signal though."

"Could just be some kind of interference with the radio signal or a problem with the battery in the implants," Max offered, finally catching up to George. "We'll set up some traps around the den then search for some scat, hopefully they haven't gone far. And if something happened to Julie—"

"Eighteen acres will take us a while to search," George said crossly before catching himself. "It'll eat a lot of our time that we need for the other dens."

"Yeah, we'll just have a late dinner is all." Max grinned compassionately and patted George on the shoulder, passing by him slowly before taking off like a shot.
"Last one to the den cooks dinner and washes the dishes!"

The once gangly youth's running showed off his well-defined and toned muscles, and George guessed Max could almost be as tall as him now. Max ran joyously, laughing while George gaped with shock before he wised up and chased Max down. Cooking dinner wasn't a problem for George, but he didn't want to get stuck with doing the dishes. Scrabbling off the rocks on the lake's shoreline, George caught up to Max easily, the traps weighing his friend down. Giving Max a push when he went by, George ran full out to Julie's den, momentarily forgetting his worry over the young weasel and her kits.

Breathing hard once he got to the stoat's home, George glanced back in the direction he came, looking for Max. He didn't have to wait long for the busy orange hair to come into view, Max's bandana hanging onto his head by a thread. George grinned when Max finally reached him.

Max scowled. "You gave me the traps on purpose."

"I wasn't the one who called the race." George laughed, his head falling back.

Max's eyes narrowed, but his retort died on his lips. "You… fuck, I don't know. Help me with the damn traps."

Max groaned, handing off the traps one at a time, waiting patiently as George set them and scoured the ground for any sign of Julie and her kits. He'd implanted the mama short-tailed weasel with a tracking device the year before, the babies were her first litter. Who knew how she would fare with her first set of young? Most female stoats didn't have more than one litter. The harsh environment didn't exactly work in favor of survival. They lived in an eat-or-be-eaten world.

"There is fresh scat in the latrine, but the kits are about eight weeks old and it could be theirs," answered George absently, stepping over a log, still searching.
"We should put an implant in each of them soon if we want to follow them."

George turned and found his friend on the other side of the log. "You helped me pack them."

"Why don't you go in the opposite direction and see if you can find any traces of Julie."

"Try not to step in the shit." George's lips twitched. "I don't want your shoes stinking up the tent again tonight."

George cackled and went back to his task of finding Julie. It always made him feel good when he could get a rise out of Max. It helped George take his mind off more depressing things. Like Julie. He really hoped the weasel just had a faulty tracking implant. George never liked losing one of his subjects. He felt the loss deeply every time he did. The animals were so much easier to understand than people. Besides, people had caused the problem to begin with. Deforestation in the area hit certain populations hard, he hoped his stoats could weather the current crisis, but one never knew for sure. Not until all the data was in.

He didn't like the sound of that yell. "What?"

"I think I found Julie."

George rubbed his temples. "Think? Why does that not sound good?"

"Because it isn't," Max replied flatly.

Unfortunately, George's worries had been well-founded. Julie's tracking device had been destroyed in a fight. Julie's small lifeless body, her normally glossy sandy-brown coat dull and her vibrant black eyes vacant, had been only a few hundred meters from her den. Bite marks showed evidence of a fight with a larger predator. Julie may have won the fight but ultimately lost the battle.

"What about her kits?"

"We'll see if we trap any." George sighed, stretching as he stood up. "They may or may not make it without her at this point. Due to their thermoregulation problems they stay huddled together for the first five to seven weeks while the mama's out and about."

"I remember." Max frowned. "They're already eating solids and their eyes should be open by now. How many were there? Six?"

"Yup, she had a small litter." George scratched his stomach, assessing the area. "So only time will tell if they make it, but chances are they won't. Kits usually aren't independent until about three months. They're only two. They have no guarantee."

"Are we gonna try to get into the den?"

George shook his head. "No, hunger will drive them out."

"But they'll get cold if they stay in the traps overnight."

"We'll come back this evening and check." George scratched behind his ear, glancing around. "That way we won't chance it."

Max sighed. "We still have ten other spots in the eastern quadrant to check out today."

"You're the one worrying about the kits freezing."

"Come on," said George, pointing at his pack. "Let's bag Julie and get moving, time's a wasting."

"It'd be nice to know what killed her, and some of the others could use the experience." George shrugged.

"You're worried about my boots smelling up the tent but are willing to carry a half-eaten weasel around," complained Max. "I don't get it."

"At least Julie will be in the freezer, your boots won't be."