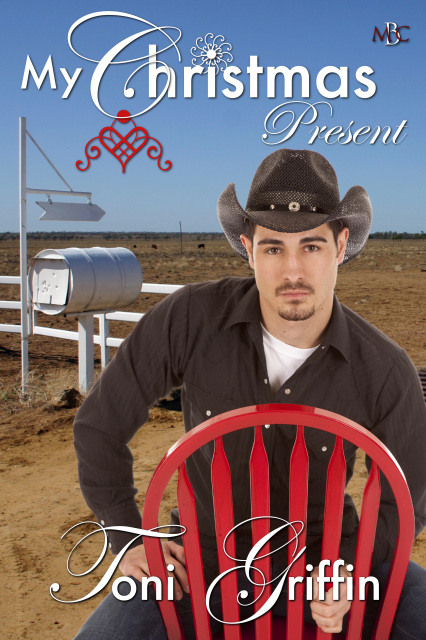 Lucas has only ever wanted one thing—his dad's best friend, Mitchell.

Finally home after graduating from uni, Lucas arrives in time for Christmas. The one present he wants more than anything is the one that's been forever out of his reach, his dad's best friend, Mitchell.

Mitchell has watched Lucas grow over the years into a smart, sexy young man. Falling in love with his best friend's son was never in his plans. The early Christmas present Mitchell receives will change his life forever.

Lucas knew just where to find his father. The end of the work week had arrived, and Friday night meant Benjamin Winters would be down at the local pub with his best friend, just as he had been for so many years Lucas had lost count. It was a tradition that had started when he was younger; Lucas thought it might be because his dad was lonely, but he couldn't be sure. Ted's Place was nothing special; however, they did serve the best steak in town.

Lucas couldn't wait to see his father again, but more than that, he couldn't wait to see his dad's best friend, Mitchell Morgan. His dad and Mitchell had grown up together, living on neighbouring stations in far north Western Australia. His father, Ben, had never wanted to work the land, instead he'd become a police officer and loved his job. His dad had been born to serve and protect others. With Lucas being too young at the time to inherit the land, his grandparents had sold up when they retired and moved to the east coast and cooler weather.

Mitchell had been a constant in his father's life since grade school. He had been there the day Lucas came into this world, his mum and dad being only seventeen at the time. Lucas was the result of teenage hormones, one too many drinks and a lack of protection that didn't seem all that important in the heat of the moment. Boy, were they wrong.

Lucas had been lucky though, he could have been given up for adoption or even aborted, but his parents had wanted to keep him. Instead he grew up, every day knowing he was loved and wanted. Three years after Lucas had been born, Mitchell stood as best man at his dad's wedding. However, not even five years later, Mitchell had had to do the impossible and help his dad keep it together after Lucas's mum had passed away from breast cancer.

Mitchell had been there for all the important parts of Lucas's life. The most difficult of which, being when he came out to his father at age sixteen. He'd had a crush on Mitchell since he was fourteen and started to suspect he might be gay. Everything about Mitchell drew Lucas in like a moth to flame.

Mitchell had black, wavy hair that always looked like he had just gotten out of bed, when he wasn't wearing his Akubra. He had a strong chiselled jaw that seemed to Lucas like it had a permanent five o'clock shadow and the most amazing silver/grey eyes Lucas had ever seen.

Also the man looked drop-dead gorgeous in a pair of Wranglers with his boots and cowboy hat. He had thick muscular legs and arms that Lucas wanted to be wrapped up in more than anything. Lucas had been jacking off to fantasies about Mitchell for the last nine years of his life.

He had, however, never gotten up the courage to do anything about his fantasies. Lucas saw the way Mitchell would look at him occasionally when he didn't think anyone would notice. Lucas's heart would beat rapidly and his imagination would run wild with thoughts of the pair of them together, all hot and sweaty in sated bliss. His thoughts never lasted long though, as he was sure Mitchell would never act on whatever feelings he might have towards Lucas. The sexy cowboy was too honourable to ever do anything that might cause Lucas's father a moment of grief.

Lucas had thought about those sly looks constantly and decided he needed to know once and for all if the love he had for Mitchell was reciprocated. And yes, Lucas meant love. His feelings may have started out the same way any teenage crush had, but they soon grew into something much more. Lucas thought constantly of the stubborn cowboy and often wondered what he was doing or if he was happy.

Being anywhere near the man would have Lucas sporting wood within seconds of Mitchell's scent hitting him, even if that scent was earned by a full day of work out in the sun riding horses and herding cattle. Mitchell's scent was wild and masculine and entirely his own. Lucas had never smelled anything as good and thought if he were able to bottle it, he would make a fortune.

Pulling into the parking lot, Lucas prepared himself to turn his car off, and with it, the semi-working air conditioner. He couldn't wait to get inside and cool down. Shutting off the engine, Lucas resigned himself to the wet heat outside as he quickly got out and locked the doors. He raced to the entrance of Ted's as fast as he could, wanting cool air to once again surround his body.

He sighed with relief when he stepped inside the pub. Lucas enjoyed the feeling of being hit upside the head with a blast of cold air. His hot body started to relax as it slowly cooled. Looking around, he noticed all the Christmas decorations and the giant tree in the corner with presents underneath for all the kids in the area. Finally he spotted his dad and Mitchell sitting at their regular table, a couple of beers in front of them.

Lucas stood there and stared at the man who had meant everything to him for so long. After being gone for most of the last four years at university, Lucas couldn't get enough of looking at the gruff man.

Working the land and raising cattle seemed to be in Lucas's blood, unlike his father's. Lucas had worked on Mitchell's station, the Double M, during the school holidays every year since he'd turned sixteen, even after he went off to uni. His love for the land had directly affected what he studied at uni, and he had walked away with a Bachelor of Animal Science from Murdoch University in Perth. The one thing he hadn't counted on when he left for uni had been how much he would miss Mitchell. The ache had been both physically and mentally debilitating for a time.

He'd thought about Mitchell when he was alone in his bed at night, every night. Lucas had hated being away at college. Yes, he had experimented with other boys his age, but it was always Mitchell's face he saw when he was with anyone else. He had hoped in time his feelings would fade away, but instead they had increased toward the older man, frustrating Lucas at times.

Still standing just inside the door, Lucas continued to look his fill. Mitchell was pushing forty these days, but Lucas thought the man had never looked better. He startled when right in the middle of the conversation Mitchell was having with Lucas's dad, he stopped talking and his gaze immediately zeroed in on Lucas.

He saw surprise and what he hoped looked like longing flit across the stunning silver eyes, but Lucas couldn't be sure from this distance. Lucas's father noticed Mitchell's distraction and turned to stare at his son for a second before his face broke into a wide grin and he stood from the table.