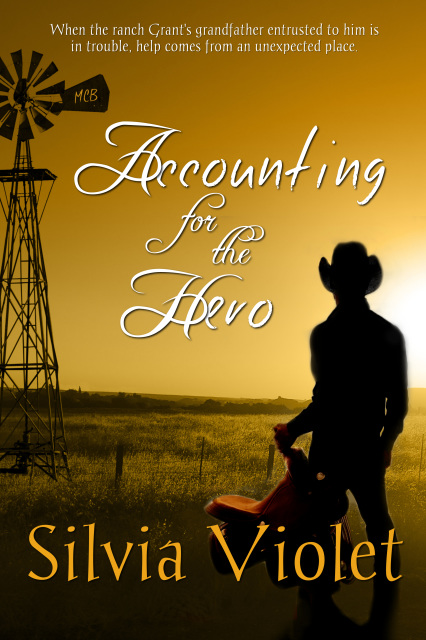 Accounting for the Hero

Grant longs for a hero to ride up on his valiant steed and revive his failing ranch, but he hires, Miles, a man with a desperate need for a job and no ranch experience. Miles may know a lot more about bookkeeping than calf-roping, but that doesn’t mean he’s incapable of heroics or of capturing Grant’s heart.
Add to Cart

Grant leaned on the porch railing and looked out across the dry fields. Most of the grass had turned brown after a long summer with almost no rain. The cattle were skinny, and they hung their heads, looking as if they didn't have the energy to move. Grant didn't have the money for extra feed, and no one would buy the animals from him with them looking like that. There had to be a way to turn this mess around, but hell if he could see it.

He took another bite of the chocolate cake his aunt had brought him when she'd visited earlier in the day. He'd given up on slicing it and was now eating directly from the cake plate, pretending he was evening up the edges. Unfortunately, his aunt didn't have any better ideas than he did. She'd told Grant's grandfather to sell and move to town when his health started to fail, but he wouldn't give up the farm, especially not to developers, and now, with Grandma gone too, the land no one wanted was all Grant's.

Real estate had gone belly up several years before, and while everyone kept predicting the slump would turn around, no upswing had materialized. On her deathbed, his grandma told him his grandfather had insisted the farm be passed on to Grant, because he was the only one in the family who might have the balls to keep farming. How the hell had his grandfather known that the family fag, who'd rather spend a night seducing men in a club than a day riding the range (unless it involved men in assless chaps), was the one who would keep the ranch running? But obviously, Grandpa had known something he didn't, because after burying his grandma, Grant had quit his job in Austin and moved forty miles away to the small ranch outside the little town of Trilby.

He hadn't liked anything about his job as a technical writer for chemical company except the steady paycheck. For over a year, he'd been restless and ready for a change, but as much as he'd loved his grandparents' farm as a kid, running a ranch was not the change he'd been imagining. Yet here he was, with skinny cattle, dried-up fields, equipment he barely knew anything about, and only a few horses as companions.

He was out of his fucking mind.

Grant sighed and looked down at the cake plate. If he didn't stop soon, he was going to eat the whole thing. Fortunately, one thing could be said for working on a ranch, it kept you in shape. He'd never been more fit, not even when he was spending several hours a day at the gym.

He took one last look at the dusty yard and the brown fields. Then with a harsh exhalation, he turned and went into the house. Despite all the problems, the farmhouse kitchen was still a place of refuge for him. When his parents had been fighting a lot right before their divorce, he'd come here often. His grandmother loved for him to sit at the counter while she cooked. She'd let him stay for supper any night he wanted to. Sometimes he stayed overnight, and she drove him to school so he didn't have to sleep in a house filled with anger. When he was a teenager, he came out to a cold reception from his dad—his mom was long gone by then—but his grandma was there with pie, coffee, and a big, warm hug. She didn't care who Grant loved, and she told her son off for being an ass. Eventually, he came around and things got better between him and Grant, but even when Grant came home from college, he was most comfortable at the farmhouse, sitting on one of his grandma's kitchen stools.

He set the cake plate down, grabbed his tablet from the counter, and clicked on his favorite internet radio station, an eighties mix he'd been perfecting for years. Grant was only twenty-six. He'd barely been born in the eighties, but his brother was ten years older and he'd instilled a love for eighties music that Grant had never shaken. He'd been a regular at eighties night at his favorite club in Austin, Day-Glo pants and all. He sighed, remembering those days and thinking how some of the boys he'd taken home would laugh to see him now.

Once the music was going, he started washing dishes. The first song was a slow tune he only vaguely remembered hearing, but when it ended, "Holding Out for a Hero" started to play and soon he was dancing and singing like he was part of the cast of Footloose himself.

As he finished up cleaning the kitchen, Grant let himself fantasize about being saved by a hero, a big muscular man who came riding up on the requisite white horse, a muscular man with plenty of money and lots of ranching know-how, one who'd enjoy fucking him as much as he'd enjoy saving the ranch. Now that would be a dream come true, but no one was going to save Grant. Unless…