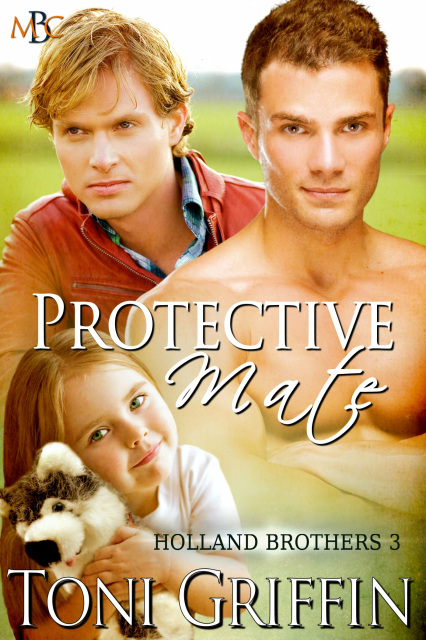 Life isn't meant to be easy, but for Zachary Bennet the last two years have been downright hell. The one shining light in his life, his precious daughter, Hayley. Deciding he needs a clean break, Zack gets a new job in a small town called Leyburn in the hopes they can settle down and live a peaceful life.

Between worry over one brother's increasingly erratic behaviour and constantly walking in on the other two making out with their mates, Simon Holland is ready to pull his hair out. All he'd ever wanted in life was a mate and a family. When his wish is finally answered with Zack's arrival, Simon finds out first-hand how far hate and bigotry can drive some people. But life wasn't meant to be easy and Simon would protect what was his to the end.

Please Note: PM has been reedited, and expanded by 25 K.
Add to Cart

The first day of high school and Zack was feeling overwhelmed by everything. He'd been at the top of the food chain in primary school, a big kid. Now he was starting at the bottom again. High school not only had a completely different feel to it, but also a different program, and Zack knew it was going to take some time to get used to it.

How he was going to remember what classes he had every day and where they were all located was beyond him. Let alone all the new teacher's names he'd have to learn. The primary school format of having one classroom to spend the entire day in was so much simpler.

Zack shouldered his school bag and headed in the direction of an empty table across the quad so he could sit in peace and eat his lunch. Luck wasn't with him though, as just as he was about to sit down he was nudged in the side by someone else trying to sit in the exact same seat.

Zack looked up, expecting to find a bigger kid about to tell him to buzz off. Instead he found himself staring at a pair of the brightest green eyes he'd ever seen, a cute nose and a smiling mouth.

"Sorry. I didn't see you there," the girl said, waving her book at him. Zack understood. He'd been looking in his backpack for his lunch and wasn't paying attention to what he was doing either.

"Me too," Zack said as he turned to start walking away.

"Hey, you don't need to go. The table is plenty big for the both of us." She waved at the remaining empty chairs.

"I wouldn't want to disturb you," Zack said.

"Nonsense. Name's Sarah Stewart. Who are you?" she asked as she took a seat and stared at Zack, waiting for him to sit down and start talking.

"Well, I'm me, obviously," Zack replied with a straight face.

Sarah giggled and the ice was broken. By the time the bell rang to signify the end of lunch, they had become fast friends and by the end of the week they were inseparable.

Their high school years flew past with the two of them sharing everything, including Zack's biggest secret.

The evening of the first full moon after Zack turned sixteen, he and Sarah were lying on the floor in the lounge at his place doing their homework. Zack's entire body heated, like his blood was boiling, then his arms started sprouting fur. He'd looked over at Sarah, saw her wide eyes staring back at him and said the only thing he could think of.

"Please don't scream." He hadn't expected this to happen quite yet, and he hadn't planned on his human best friend being there when he changed forms for the first time in his life. He really hoped Sarah could deal with what was going on because he couldn't lose her as a friend.

Sarah's eyes widened even farther as his words registered, and then his bones started to reshape. Zack's face elongated and before he knew it, he stood on all fours tangled in his jeans and shirt and staring at his best friend as she looked back at him in complete wide-eyed shock.

Zack's mother came through from the kitchen. "Honey, would you two like—" Her question cut off when she noticed Zack. His mom stopped in her tracks, mouth hanging open. Gathering her wits quickly, she looked at Sarah to gauge her response to what she'd just witnessed. "Sarah, honey, are you okay?"

"That is so frickin' cool!" Sarah turned and quickly picked up her homework before waving it in front of Zack's face. "Come on, Zack! Be a good boy and eat this for me. That way I don't have to do it, and I'll have such a good excuse."

Sarah broke into a fit of giggles as Zack took a playful bite at the hand holding her homework.

"Zack!" his mother scolded. Gentling her tone a little, she said, "Go on up to your room, Zack, until you can shift back. Sarah and I need to have a nice long chat."

Zack looked between his mother and best friend a couple of times, but not seeing any anger or worry from either of them, he did as his mother directed and padded out of the room.

Sarah tried to get him to eat her homework several more times after that day, always laughing at her own joke, and Zack just smiled at his friend indulgently.

After that everything else seemed like a piece of cake. Zack confided in Sarah when he realised the boys at their school held more appeal to him than the girls. Sarah simply hugged him and kissed him on the cheek, said being gay didn’t matter, and she would always love him.

"You have to tell your parents," Sarah said as she pulled back from the hug.

"But what if they stop loving me?" Zack asked, biting his lip. Zack also didn't want his folks to be disappointed in him, and he was afraid if he told them he was gay, they would be.

"Zachary Thomas Bennet!" Sarah scolded him. Zack cringed slightly at the tone in her voice. "Your parents love you to death. There isn't a single thing you could tell them that would change that fact. You remember how wonderful they were to me when I found out your big secret?"

Zack sighed. Sarah was right. He knew his parents loved him. It didn't stop him from being scared though.