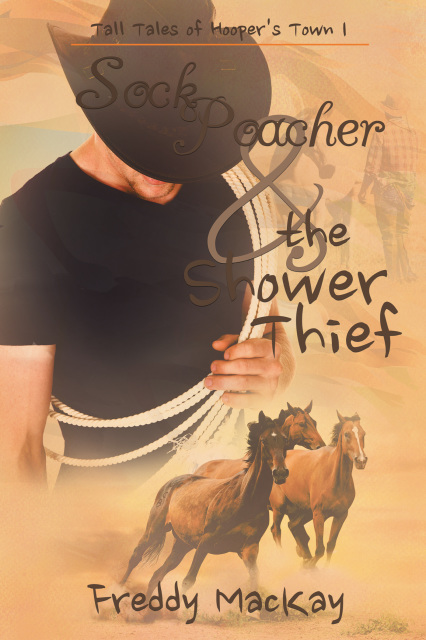 Namid’s a city boy, born and bred, but he needs a change of pace. Tired of the political jockeying and demands of being a doctor in Chicago, he moves West to Hooper's Town. He’s about to find out that “quaint small town” is really a euphemism for “completely weird.”

Porches that attack people, herds of cats, nookomis watching him like hawks, Namid accepts the small town as it is because of one important factor—a recluse of a cowboy he just happens to save from a fire. Now if only Namid could find a way to tell Dusty the whole town is gleefully gossiping about them dating.
Add to Cart

The crickets stopped chirping the moment they heard a scrape along the dirt driveway. Namid wasn't trying to be quiet, so he'd expected the noise to stop. The absolute vacuum that replaced their song disconcerted him, though. He came to a halt and glanced around. The place looked like a building out of one of those ghost town tourist traps out west.

The simple, small ranch house had a wraparound porch with precarious steps. The shingles had seen better days, the paint was faded and peeling, and the shutters looked like they were about to drop off if the wind blew hard enough.

Maybe no one actually lived there anymore.

But Namid had seen the clothesline from the field across the street, and different length articles hung off it, flapping in the breeze. He really didn't get a good look at them considering how far away he was. Rags could be strung up and he wouldn't be any wiser.

A part of Namid wanted to check around back to make sure he hadn't been seeing things, but he didn't want to get accused of trespassing if someone happened by, or if the homeowner was actually home. Pissed-off homeowners were not fun. People did own guns in these parts.

Namid debated for a moment, trying to decide whether to knock on the front door. A gust of wind made the decision for him. He trembled, cold, feet frozen. Namid started back up the drive. He hoped whoever lived at the haunted house was friendly. It'd be a long walk home if they weren't. He hadn't brought his cell phone so he couldn't call anyone. Not that he knew anyone in the small Dakota town anyway.

He should've grabbed a pair of shoes before leaving his place, but he'd been so caught up in the sunny afternoon and exploring his new yard, he didn't stop to think about footwear. Once he got to the back of his yard, the town gazebo looked interesting.

When he was done checking out the Hooper's Square, Namid noticed the old school playground and went down the metal slide, and next thing he knew Namid was on the edge of town, and the fields looked so pretty. Namid couldn't help himself, he just kept going. Then suddenly, dark orange and red rays were crossing the sky, the sun setting. Fall air cooled quickly without anything to heat it.

This was why Namid found himself walking up a dirt driveway to a house that would be easier to tear down than to fix, a creepy house he could probably push over with one hand. He really didn't want to knock on the door, nor did he want to find out who would willingly live in such a place. Though, sometimes, people had no other choice.

An image of an old cat lady with no teeth popped in Namid's head just as he raised his hand to knock. He burst out laughing, so hard that he turned away from the door and worked to compose himself.

What an awful prejudice to have. It wasn't right and completely unfair.

Finally able to get his case of the giggles under control, Namid faced the door again and rapped on the worn wood. He took a step back and waited. No sound or movement came from the house. Namid tried again, and was met with the same 'this is awkward' feeling.

Welp. Maybe it really was a ghost house. That sucked.

Namid began down the steps, readying himself for the long walk home when he hit something. A sharp twinge raced up his foot to his ankle.

Inspecting the damage, Namid cringed. Blood gushed from his big toe, the nail broken in half. The skin had been torn open.

Namid frowned. He needed to get home so he could examine it better. Stitches looked necessary.

What had he knocked into? Namid checked around him on the stairs, inspecting for the offending object that attacked him. A splintered piece of wood stuck out from the steps.

That answered that. What it didn't answer was how he'd get home with a weeping hole in his person.

Walking back to the clinic on a bloody foot was a bad idea. Namid didn't want to chance the wound getting worse. He'd have to do something.

Namid pulled at his t-shirt. He could wrap it, but he'd freeze on the way back. Well, it was better than nothing. Namid tugged his top over his head.

He already had it halfway off when he remembered the clothesline behind the house. Even rags were better than freezing his nipples off. Hopefully they were clean. It had rained recently. The sun had been out. One could wish.

Standing with care, Namid checked to see how well he could put weight on his injury.

This sucked on so many levels.

Okay, now he felt a little better. Maybe that absurd study had been right about how swearing made people feel better when they're hurt. It deserved more than an Ig Nobel Award. Swearing certainly did wonders for Namid. Every. Fucking. Time.

Once his breathing was back under control, Namid took a tentative step. Okay. He could do this. He could walk. Even if it did feel like a thousand sharp needles were impaling him.

Namid shuffled around the back, working with care to keep his toe pointed up. A cramp developed in his arch, but Namid kept at it. If he was lucky, he could wash it off in the yard. With what he had no clue, but resourcefulness came second nature to him. Namid would figure out something.

Once he made it around the house, Namid was happy he'd been right. The clothesline was in fact a clothesline. Clothes were hanging off it. Well-laundered, good-smelling clothes.

So someone does live in the crappy house.

In fact, on closer inspection, the stuff hung on the line wasn't cat-lady attire. They were men's garments.

Namid did not need to be walking around with a blouse tied around his foot. Total weirdness would fuck with his head on that one. Not to mention he'd feel guilty about taking clothes from a little old lady. He'd return to pay for ruining whatever he borrowed, he'd been raised right after all, but a fair amount of older women—like his nookomis, grandma—had unnatural attachments to what they bought.

Guys were another story. Most, especially country boys, didn't have huge sentimental attachments to their clothes. At least their general everyday wear. Chaps, hats, belts, and gear were another story all together. And buckles. Especially the rodeo boys. Never get between a broncin' buck and his buckle. Namid cringed at one particular memory, then quickly redirected himself by focusing on the different garments hung up.

There had to be something he could… Yes!

Luck was on his side. Namid spotted several pairs of socks on the line. Those were easy enough to borrow. Who cared about socks? The damn things sprung holes with every turn and disappeared like cockroaches when the lights switched on. He'd come back with some new ones and a note later, thanking whatever poor soul lived out here.

For now, he just wanted to get back home. His foot ached, and Namid was cold. He didn't want to show up for his first official day of work sick.

Namid wobbled over to the socks and pulled them off. After another thorough inspection of his foot, Namid decided one pair wouldn't be enough. He needed to cushion the wound and stem the bleeding. He yanked a few more pairs off the line before sitting down.

Carefully, and with much consideration to the amount of blood gushing from his toe, Namid eased a sock around the ball of his foot, breathing through the pain. Red immediately stained the pure white cotton. So eww. If it had been a patient's blood, Namid would've had no problem, but this was his. It'd become personal.

Namid wrapped another sock around the tip of his foot as tight as he could, then stuffed his foot through two more. Now it just looked like the Stay-Puft marshmallow man attacked him. He also felt lopsided. It was odd not to have socks on both feet.

Namid glanced at the socks next to him.

Another one couldn't hurt.

He pulled one on his other foot, which left three in the pile. Namid couldn't stand the thought of unmatching socks, so he stuck one more on to even things out. He stood slowly, holding the remaining socks in hand, keeping his weight on his right foot.

A cursory glance showed he'd gotten the leftover socks dirty. He cringed. It'd be even ruder to put the unclean stuff back on the line. Of course, if he left them on the porch, they might get missed…along with the three other pairs Namid was currently borrowing.

Behind him, the distinctive sound of a shotgun being cocked interrupted Namid's musings, and a man spoke, "You have ten seconds to explain why you're on my property."