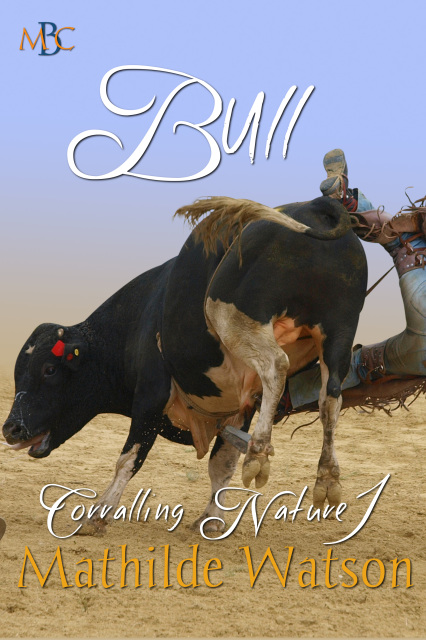 Riding and herding. Those spurs that jingle-jangle-jingle. What is it about cowboys that so doggedly fires the imagination? Join the Mischief Corner authors as they give you their own unique takes on the cowboy mystique and mythos, from the American West, to Australia, to outer space. The cowboy story will never be the same…

BULL: Corralling Nature 1 - Mathilde Watson
Shy, awkward, and overweight, Roland Paulson wasn’t the kind of man who attracted a lot of amorous attention. His romantic life consisted of a series of short lived flings and one night stands with other men who were just as desperate. When propositioned by a charming cowboy with the body of a god, he expected sex. He never imagined the wild ride that would follow.

From the moment Dodge Bramen set eyes on the adorable red-head he wanted him. And Dodge was a man who gets what he wants. He had no trouble luring the guy into his bed, but keeping him there was a different story. Deep kept secrets and unexpected discoveries could either strengthen their bond or break it.

Also available in paperback for $7.99.
Add to Cart

"Hey, are you the manager? I need to talk to the manager, right now!"

A man's shrill, angry voice echoed throughout the hotel lobby, causing the picture frames on the wall inside Roland's office to shake and rattle. Roland closed his eyes and took a deep breath, conjuring up his most pleasant smile before getting up and stepping out of his office to rescue the poor clerk behind the check-in desk.

"Excuse me, sir, how can I help you?" Roland could see the receptionist's posture relax, the relief evident on his young face. This had been a week for screw-ups, and judging from their new friend's hostile manner, they had another one on their hands.

"Are you the manager?"

The guest glared over at him with a doubtful scowl. Roland resisted the urge to roll his eyes. The nametag on his vest clearly stated who he was, as did the sign above the door he'd just walked through. Still, he often got responses like this. Even at twenty-nine, his unmanageable red hair and an overabundance of freckles made it difficult for him to pull off a professional look. Roland held out his hand and offered the guest a confident smile.

"Yes. I'm Roland Paulson. What seems to be the problem, sir?"

"This!" Instead of shaking Roland's hand, the man threw a worn and dusty duffel bag down on the counter between them. "I just flew all the way in from L.A., a four-hour flight! Then I rode over here in your hotel's shuttle, which shook and bounced the entire way! It was awful. Then I get here, and my luggage was supposed to be waiting for me in my suite when I checked in…"

"No. But this was!" He unzipped the bag, pulling out of it a length of rope and…a whip? "Tell me, do I look like the sort of man who travels with…with"—the guy glanced quickly around the lobby and then lowered his voice to a theatrical whisper—"bondage equipment?"

Roland blinked with surprise and bit his tongue, barely managing to hold his composure as he imagined the paunchy, balding man in front of him decked out in leather and wielding the whip he showed such disdain for. Damn, that mental image would probably haunt him for days now.

"I, uh…apologize for the inconvenience, sir. Clearly there has been some sort of mix-up. If I could just get your name I'd be more than happy to look into this for you." Roland stepped behind one of the computers and typed in his login information, waiting patiently for a response.

"Thank you, Mr. Braden. Give me just one moment." Roland pulled up Mr. Braden's information. Everything seemed to be in order. One of the longtime housekeepers, Kelly Black, marked the luggage as delivered half an hour ago, no complications noted. Roland sighed and pulled his walkie-talkie from his belt.
"Kelly Black, please call the reception desk."

"Well?" Mr. Braden impatiently tapped the desk with the handle of the whip he still clutched in his hand. He fiddled with the length of leather, wrapping it around his fingers and then unwrapping it. He had the rope draped over his arm, half of it puddled on the floor by his feet.

"Hey, mister! Could you please not do that? You stretch that leather and I'll not be able to get a proper crack out of it."

Roland's head shot up at the sound of the deep, rich voice, and when he saw the body it belonged to, he almost swallowed his tongue. Broad shoulders topped a finely muscled torso, clearly outlined under a thin white t-shirt. A pair of tight black jeans barely contained a set of tree-trunk thighs. Roland couldn't do anything but stare and pray he wasn't drooling. Now this man belonged in leather.

"Here, give me those." The newcomer snatched the whip and rope out of Mr. Braden's hands and Roland watched, mesmerized, as he deftly wrapped the length of rope around his hand and elbow. When he finished, he shoved it back in the bag and picked up the whip, extending his arm out into the empty lobby. With one quick flick of his wrist, the man set the whip in motion, sailing out and up into the air, then falling with a loud crack.

Startled, Roland finally looked up at the man's face. Words failed him. A shaggy mane of black hair framed a severe face. A thick brow seemed to stretch across his entire forehead and a neatly trimmed black beard, peppered with grey, covered a square jaw. An angry scowl turned down his thin lips. He had a large, crooked nose set a little off center, like it had been broken a time or two, and his deep, rich caramel skin highlighted the lines beside his eyes. Eyes that were dark and fiery both at once. Completely mesmerizing.

No one would think to call this man handsome, but in Roland's opinion, his rugged, perfect physique more than made up for his unfortunate face. His stormy eyes held a hint of danger and mystery, and his sculpted body ignited lust, a heady combination that no doubt insured he never had to sleep alone if he didn't want to. It certainly wouldn't take much more than a word or a touch to compel Roland into his bed.

"So, uh…anyone mind telling me why my gear is down here on display, being waved about and handled by complete strangers?"

"Your dirty, filthy…gear was in my suite! In my room!" Mr. Braden sputtered and pointed an accusing finger at the stranger's dusty duffel bag.

The newcomer raised his brow. "Well, sir, I can see how that would be unsettling. However, personally, I didn't need to open the matching three piece luggage set waiting in my room to determine it wasn't mine."