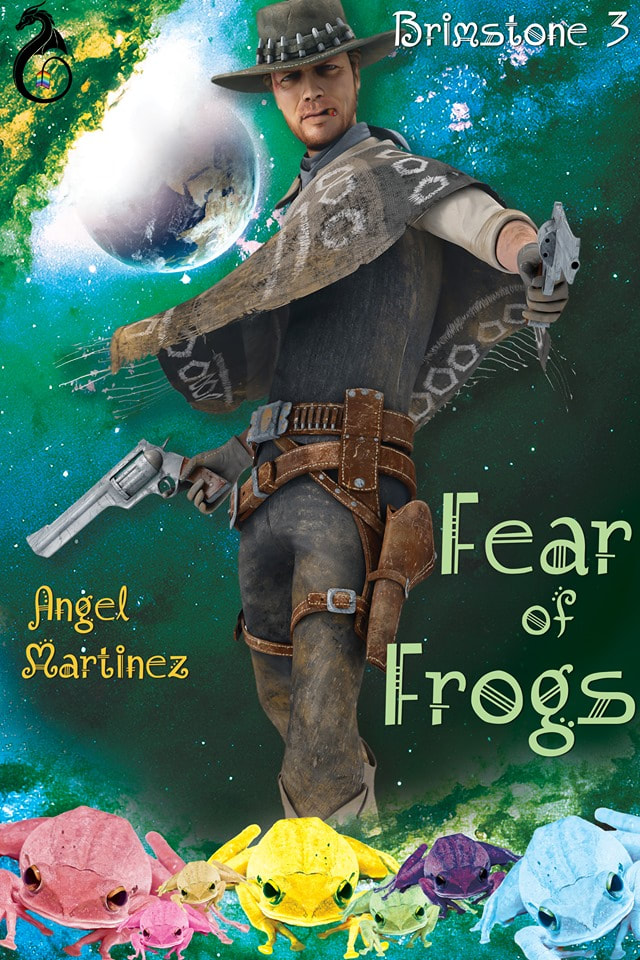 
Frogs. Why did it have to be frogs?

While Shax recovers from a near fatality, his shipmates have been busy. He's rather proud of them for taking the initiative and finding them a lucrative cargo run. His pride turns to outright horror, though, when he finds out what sort of cargo. Frogs. The one thing in the universe that incites mindless panic in Shax. Unfortunately, he also soon discovers that a healthy fear of frogs doesn't prevent frog-driven disasters.


An unlikely series of overlapping mishaps hurls the Brimstone back to an even more unlikely point in history for a couple of demons and a fallen angel in a spaceship. Somehow they need to repair and refuel, and puzzle out how to get home. Time travel has never been so messy.
Add to Cart

The decking lurched again. Shax put a hand out to stay upright andturned it into what he hoped was a fetching pose against the wall.

"Need to check the internal stabilizers. How long have we been having problems with the habitat gravity?"

"We're not." Ness's soft voice held a tinge of exasperation. He took Shax under the elbow and wrapped a wing around him protectively as he coaxed him down the corridor. "Stop trying to pretend so hard. You're a little wobbly still."

"Am not," Shax offered in witty rejoinder and most definitely did not wobble into Ness on his next step. He was merely leaning in, getting closer to his delicious angel.

All right, fine, so I'm not doing so hot yet. It was, he reminded himself, his first time out of bed since having his heart sliced open by an archangel's sword. No one back home in Hell would have believed the wound had been inflicted while he was defending an angel, but they had never known Ness, sweet, beautiful Ness.

He still struggled with the whole suspension of disbelief thing himself.

"I could carry you," Ness offered.

"Leave me a little dignity, cupcake. I think I've lost close to two thirds of my swashbuckler points these last few weeks."

"I'm sorry." The dove-gray wing around his shoulders drooped.

"It wasn't one of your better ones."

For half a heartbeat, Shax considered apologizing though he wasn't certain why. Ness was obviously a little stressed. Of course he was. Things would be easier now, though. Everything was going to run smooth as silk without violence or run-ins with scary people trying to kill them. The Brimstone's crew, all three of them, were going to work together constructively. They were going to start making better choices, safer, saner choices.

Mostly. Except in the acquisition of pretties. One had to make allowances for such things.

Ness steered him into the galley, their little kitchen space and common room. The automatic benches slid out from under the single long table, and Shax dropped gratefully onto the nearest one.

The cheerful snark of the ship's computer greeted him. "Hey, Hot Stuff! Good to see you up and around. Even though you shouldn't be."

"I'm grateful that you care, Ms. Ivana. Coffee would be even better. Now, please."

"Decaf," the CG-drag queen added with his prissiest sniff.

Shax leaned his head on his hand and managed a tired growl. "I'm the Captain. You're not supposed to argue with me." The growl dissolved into a purr when Ness started to rub his back.

"Beset on all sides." Shax shot his best wounded look at Ness and was met with steely angel resolve. "Traitor." Then his eyes narrowed in serious irritation when their pilot, Shax's business partner, sauntered in. "Speaking of traitors."

Verin stopped short of the table, steam curling out of his nostrils as he tossed his curled ram's horns. "What?"

"Yes." Shax leaned back against the supporting wall of Ness behind him. Not that he needed protection, though the combination of Verin and lost temper tended to result in violence and pain for someone. "I blame you. For all of this. For my current condition, for the possibility that we're banned in certain ports, for the loss of Ness's beautiful golden wings."

Exaggeration for effect, he knew that. Ness still had his wings. They were simply a soft dove gray instead of shining gold since his fall from angelic grace. Shax missed the gold, but in his black little heart, he conceded grudgingly that he would have missed Ness more.
Verin's steam curls enlarged to thick spires. "You can blame me all you want, dickhead. You always were a drama queen."

"Wouldn't have happened if you hadn't blurted out what you did with Ness standing right there. He loves me, and the suggestion that I was using him nearly broke his heart." Shax drummed his fingers on the table. He ventured onto dangerous ground, perhaps even where angels feared to tread, but he finally had the energy to be mad.

"He's a big boy!" Verin gestured angrily at the angel in question.

"He didn't have to run off in a hissy fit. You didn't have to chase after him. You're deluding yourself if you think an angel can love you, bonehead. And there's no way you can blame me for you being a complete moron and stepping in front of a flaming sword!"
Shax started to rise from his bench. "If you hadn't—"

The angelic Voice of Doom echoed through the galley, vibrating the deck plates, a voice so huge and awe-inspiring, it made felons want to crawl under something, preferably a thick planetary crust. Shax sat hard, blinking in shock. Verin's head jerked back and he snapped his mouth shut.

"Thank you." Ness resumed his normal, soft mode of speech.