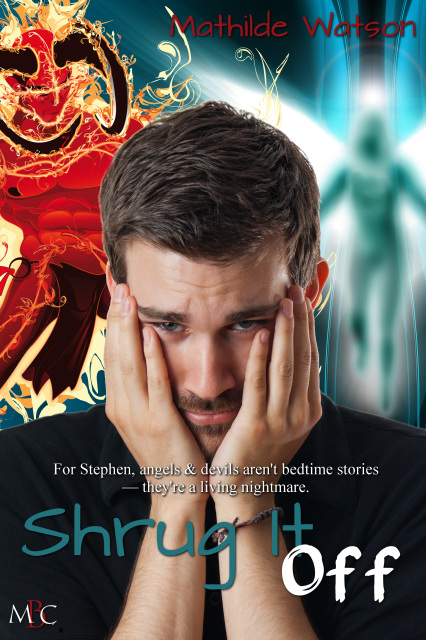 For Stephen, dating is more than a challenge, it’s a nightmare. All he wants is a man he can talk to, someone he can laugh with and be himself around. What he’s got instead is an incessant running commentary on everyone and everything.

The meddling guides posted on his shoulders each have their own ideas of what Stephen should be looking for. From the right, his angel urges him to find a man like himself: confident, successful, and upwardly mobile. The little devil on his left shoulder is only interested in a guy’s face and what he’s got below the waist. The two can never agree on anything—until Stephen meets Connor—and then things get really interesting…
Add to Cart

Connor,
I came across your profile today and your narrative made me smile. I was about to give up hope on the whole on-line matchmaking thing, but reading your description, I think maybe they finally got it right. Would you be interested in chatting with me sometime? –Stephen Rouse

Connor Williams sat at his post behind the circulation desk and glared at the computer screen. The photo of a ruggedly handsome man stared back.

Dark, spiky hair stuck out from Stephen Rouse's head in all directions while a cheeky grin showed off a row of perfect, white teeth. A neatly trimmed beard accentuated a square jaw and just the hint of laughter in his warm, blue eyes added an air of roguish mystery. The man was beautiful.

"So, how's the search for love going, sweetie? Any bites yet?"
Angela Artis, a resource officer at the middle school where Connor worked as a librarian, stopped by Connor's desk as she made her closing rounds of the campus. A recent newlywed, Angela made it her mission to pair off all the singles she knew, and that included Connor. A few months ago, she'd talked him into joining the online dating site that had paired her with her husband, convinced he would meet with the same success.

"Oh, it's going great," Connor answered. "Just a few minutes ago I got a message from this guy, asking me if I'd like to chat."

Connor turned the monitor so Angela could see the picture and she let out an earsplitting wolf whistle.

"From him? Hot damn," she exclaimed. "He's gorgeous. And built! Look at those muscles… You could climb him like a jungle gym."

Connor snorted and Angela gave him a look, then laughed.

Connor rolled his eyes. At six foot three, he doubted he would ever meet a man big enough for him to climb.

"But you get what I mean," Angela continued. "He could easily be a model in an exercise program or something."

"Hmph. Funny you should say that," Connor replied as he turned the monitor back around.

Connor switched the browser over to another open window while Angela walked behind the circulation desk to join him.

"I thought he looked too good to be true, so I looked him up on Facebook. And here he is, Stephen Rouse. Different photo, but definitely the same guy."

Angela looked at the screen, then at Connor, her expression puzzled. "And this is a problem, why?"

"Check out where he works," Connor prompted.

"Fast Forward Fitness," Angela read out loud, then shrugged. "So?"

"So, if you run a search for that gym, this comes up." Connor opened the website for the gym. "And over here you can browse through the profiles of all the personal trainers they have on staff."

"A personal trainer, huh?" Angela leaned closer to the computer screen with excitement clearly written all over her face. "Well, that certainly explains all the muscles."

Connor clicked on the dropdown menu and selected the name Stephen Rouse.

"It does," Connor conceded. "But it raises a whole slew of other questions."

The page opened and the same cheeky grin lit up the left side of the monitor. "He uses the exact same photo here as the one used on the dating site."

"Okay," Angela squinted at Stephen Rouse's professional webpage. "I still don't see what the problem is. A lot of people reuse the same photo in multiple places, especially good shots."

"The pictures aren't the problem. It's the conflicting profiles that go along with them. See here." Connor pointed to the address of the gym at the bottom of the screen. "This says he's a personal trainer at a gym in Riverside, California."

Connor switched back to the dating site and showed Angela Stephen's profile there. "But in the personal info section on the dating site, he claims to be a market researcher with his own business here in Indiana."

Angela drew her eyebrows together and frowned. "I don't get it."

Angela shook her head. "I guess not."

"And of the two identities, the personal trainer in California is much more credible. The profile is older and it's connected to what appears to be an actual, legitimate gym's website." Connor tapped the desk next to the keyboard with his fingertips, feeling anxious and a little bit angry. "And the Facebook account backs it up. So I'm guessing the man in the picture, the real Stephen Rouse, lives in Riverside and probably has no idea his name and photo are even on a dating site."

Connor sat back in his chair and let out a weary sigh.

"Damn," Angela whispered. "Why would someone want to pretend to be someone they're not?"

"I don't know, Angie. I guess some people just don't have anything better to do with their time than play practical jokes."
Connor hit the reply button and started typing.

"What are you doing?" Angela asked with laughter in her voice.

"I'm taking him up on his offer to chat sometime," Connor explained. "After all, it's the gentlemanly thing to do."

"Oh, heaven help the poor fucker." Angela laughed as she waved and headed out of the library. "You have a good time with that," she added before the door closed behind her.

"I'm sure I will." Connor told the empty room as he sent the email that would change his life forever.