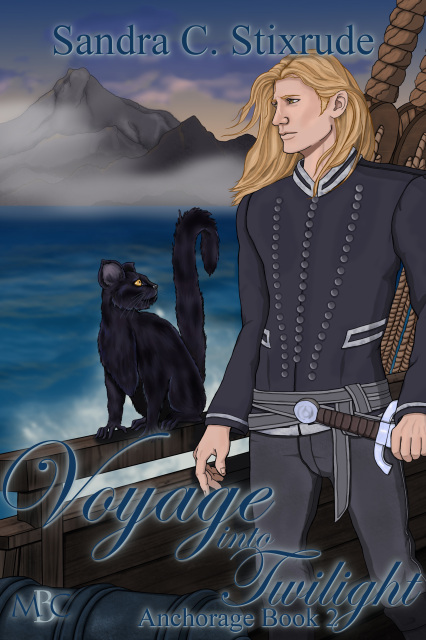 Something is hunting mercenary commander Romenel Devar, a monster disguised as friends and loved ones, so he can't even describe it. He knows it's slowly killing him, though, and he desperately needs help.

Marya and Roke have retired to their house on the steppes, their lives finally peaceful and uneventful. When Romenel collapses on their front doorstep, Marya reminds her husband that no one retires from being a hero.

Their journey takes them to the other side of the world where hordes of monsters lurk and the rules of society are turned on their heads. Romenel needs to understand both this strange new world and the hints from a distant, shared past to unravel the means to stop the monsters' deadly hunts.


At least it was warm by the fire. He stretched his legs out toward the flames and settled deeper into the soft-backed chair. He tried propping his right leg up on the grate, but his knee hurt abominably, so he drew it back and settled it on his uninjured leg instead. No, that was worse. The ankle stabbed at him. Disgusted, he threw the leg over the arm of the chair, which was only slightly better.

Customers crowded the inn's common room, the steady hum of conversation punctuated by occasional laughter, a comforting buffer against the darkness outside. It would be safe to doze here with all of these people around and he was so tired. Surely, for a moment he would be all right…

"Please, ma'am, I wish you'd reconsider." The clipped, precise voice of his sergeant drifted into his sleep. "Me and the boys will gladly bed down in the barn, but the commander's hurt and exhausted. Just look at him. Have a heart, ma'am. I'm only asking for a proper bed for him."

The innkeeper's voice answered him. Romenel remembered her from when he had stumbled to the chair by the fire. "I see him. He's the only reason I don't run you off my property. I can see he's in a bad way and I'm partial to a pretty face, not to mention he's young enough to be my own son, but, Sergeant, I can smell mercenaries a mile off and if you lot are anything else, I'll eat my shoes. Mercenaries always bring trouble and by the looks of your commander, I'd say someone was after you, to boot. I don't need them finding any of you in my inn and causing me problems."

All right, time to get up and intervene. He forced his eyes open, even though they felt as if the lids had lead weights attached, and heaved his aching body out of the comfortable chair. He had to catch himself on the mantelpiece with both hands when his right leg wouldn't support him and he stood still for a moment, waiting for the dizzy spell to pass. If only he hadn't insisted on pushing forward into the night, Brighthorns might not have slipped on that patch of ice and fallen on top of his right leg. Too late for might-haves.
Sergeant Mardis hurried to him and dragged one arm across his shoulders to support him.

He leaned heavily on Mardis and then turned to face the innkeeper with what he hoped was his most charming smile. "Perfectly all right, ma'am, I certainly understand your precautions." He extended a hand toward her. "Commander Romenel Devar. Pleased to make your acquaintance. Thank you for allowing us the use of your barn. I'll be more than happy to bed down there with the men. We appreciate your understanding. The men were concerned I wouldn't last in the saddle much longer."

The innkeeper shook her head and gave him a sympathetic look. "Can I send a healer out to you, Commander? It's the least I can do under the circumstances. You look like you could use one."

"Thank you, ma'am," he answered cordially. The room had started to sway. No, wait. That's me. "I'd appreciate that very much." Why is it so dark in here all of a sudden?

"Joris! Tren!" the sergeant bellowed. "Come help me! He's going out on us!"

There were strong arms around him holding him up, but he still had the sickening sensation of falling and a loud rushing filled his ears…
The room had stopped pitching. He was… where? On his back, lying on something that rustled. Straw?

"…and you keep the compresses on, Sergeant, if you ever want him to walk again," someone was saying sternly. It sounded so far away.

"Yes, sir," the sergeant's voice seemed to drift to him from across vast distances. "We'll keep a close eye on him."

"And for heavens sakes, he needs rest!" the healer scolded. "When was the last time he actually slept?"

"Four, five days ago," Sergeant Mardis answered. "He dozes in the saddle sometimes."

The healer snorted. "That doesn't qualify as sleep where I'm concerned."

Romenel opened his eyes and had to blink a few times before anything would come into focus. The healer, a grouchy-looking old man, nearly bald, stomped about nearby. Still, it wasn't a woman. He didn't feel comfortable with women healers. Except for a special one whom he hadn't seen in years, who loved him like a son, whom he knew would help him understand this horrible thing happening to him. He had to find her. He had to.

"Sir?" The sergeant touched his shoulder. "Are you back with us?"

"I'm here, Mardis." His voice sounded hollow and distant. "I'm going to make a guess and say we're in the barn."

"Good," the healer grumped. "He knows you. He knows where he is. I'm going home. Commander, if you want to live, get some sleep."
With that, the healer gathered his bag up and stumped off.

Sergeant Mardis shook his head. "Sorry about that, sir. He had no right to talk to you like that." Then he turned to Romenel, his face carefully expressionless. "We brought you upstairs to the loft, sir, where it's a bit warmer. The men are downstairs with the harduks."

A wave of panic engulfed him. He grabbed the sergeant's arm. "Mardis, you're not going to leave me up here alone in the dark, are you? Send some of the boys upstairs, stay up here with me, at least leave a lantern on!"

The sergeant sighed, no longer able to keep the concern from his face. "Sir, we're right downstairs if you need us. I'd be glad to sit with you a bit if it helps you get to sleep, but, sir?"

"I wish you'd tell me what's going on, meaning no disrespect, sir, but me and the boys are worried about you."

"If I told you, I doubt it would make you feel any better."

"No, no, we can't." Romenel rubbed the side of his face and yawned. "We'll ask around town tomorrow, then we're moving on. I have to find them."

"Yes, sir." The sergeant's tone implied he did not agree, but he would never say so. "Try and rest, Commander, go to sleep. I'm right here if you need me."

It seemed moments later when he woke again with his mother sitting beside him. He was still in the barn loft, still lying on blankets in the straw. His mother rested one hand on his forehead and the other gently held his hand.

"I heard you were sick," she said, smiling her warm, sunny smile. "I came to help."

"It's… good to see you, Mama." Something nagged at the back of his mind, something he should remember. "I think I am sick. I feel so weak, so tired…" It felt as if he sank into a fever dream, so weighted down by fatigue was he. Maybe with his mother here he could finally rest.

Son? She had never called him "son." Sweetie, darling, honey cake and when he had been small, her pretty, golden moonpup, but never "son." With a jolt of horror, he remembered. His mother had been dead for almost two years. Oh, gods. Terrified to look, he glanced down at the hand that held his. Her fingers ended in long, gray claws.