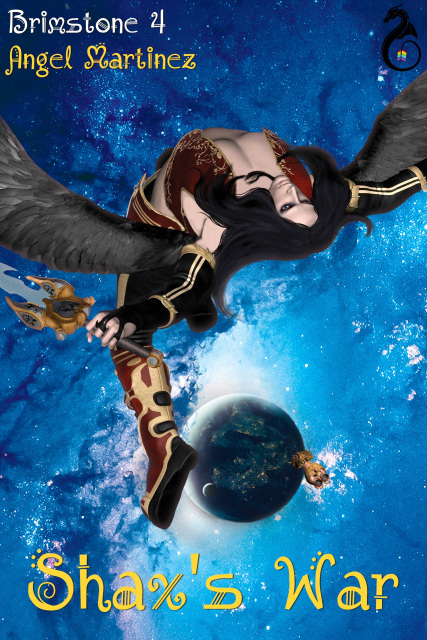 
Brimstone Series: Book 4
Next Book: Beside a Black Tarn
Preceded by: Fear of Frogs


The only rule that matters—don't steal from the Demon Prince of Thieves.

The boys desperately need a vacation. With the not-quite-ill-gotten gains from the Frog incident, Shax takes the Brimstone's crew to the exclusive resort planet, Opal, for some much needed rest and relaxation. The resort has everything a demon prince and his crew could want, but an incident on the Trauma Ball court has Ness stalking off in anger and sends events swiftly spiraling out of control.
​
Loving a demon isn't easy, as Ness has discovered, and harder still for a newly fallen who's still sorting out what that means. A new friend lending a sympathetic ear helps until Ness learns too late that friendship was the last thing on BJ's mind.


Shax will need every bit of his cunning and his legendary luck to save his Ness as he’s drawn into a web of criminal experiments and…pink hedgehogs?


THE BRIMSTONE SERIES
Potato Surprise: A Brimstone Prequel
Hell for the Company
Fear of Frogs
Shax's War
Beside a Black Tarn
The Hunt for Red Fluffy


The Brimstone Journals
Add to Cart

Shax yelped as the trauma ball hummed against his palm, the surface shifting from swirling orange toward yellow. Before it could deliver its nastiest shock, he flung the thing at Verin's head.

Sparks flew as Verin swung his horns and batted the ball away. He aimed right for Ness, who sidestepped and caught the ball as it powered back down to blue. Wings spread for balance, tip of his tongue protruding from the corner of his mouth, Ness spun and ran the three steps up the ramp at the court's far end, aiming for the hovering sphere goal.

At the last second, the goal moved left and Ness's shot caught the magnetized lip, which hurled the trauma ball back at him at some ridiculous, unsafe speed. Shax winced at the sharp crack when hard ball met angel head.

"Ow." Ness flopped down at the top of the ramp, rubbing at his temple.

"Someone gonna explain to me again how this is fun?" Corny called from where he balanced on the swinging planks that made up midcourt.

He'd been stuck on the water hazard for several plays, his muscular body and high center of gravity an indisputable disadvantage since the wrong move would send him into the water and cost him a five-minute penalty. Their cowboy had figured out the hard way in the first quarter that the pool itself enforced the penalty and didn't let the penalized player out a second before.

The ball was now happily rolling along the elevated sidewall ramps, and Shax prepared to jump for the rings that would put him at the right height to catch it when it rolled free. Had they been playing teams…but no one could agree on a fair way to pair the four of them up, so solo it was.

Shax cocked his head, listening to the rumble of the ball as it trundled downward. Ness was still on the ramp. Corny was stuck. Verin was navigating the sponge quadrant where his claws were sticking. Perfect. He leapt, caught a ring in each hand, got a good swing going, and let go with his right hand just in time for the ball to drop from the chute.

With a whoop, he swung free and dropped with the ball clutched to his chest, only to be hit from behind with the force of several megatons. Wind knocked out of him, he could only watch as Verin snatched up the ball.

"Attempted murder isn't supposed to be part of the game," he wheezed as Verin took his shot. It seemed to be too far right, but the sphere turned and the ball shot inside.

"You're all right, you baby," Verin growled. "Get up before you really get fucked up."

Shax heaved himself to his feet, staggering a few steps before the floor decided he'd been in one place too long and started bucking.
Ness had moved now too. "Shax? Sure you're all right, love?"

All four of them managed to reach the sand quadrant closest to the near goal where they crouched in anticipation, waiting for the sphere to spit out the ball. Shax got Verin's elbow in his ribs and a playful shove from Corny as they jockeyed for position, but they might as well have stood still. The sphere rumbled and disgorged the trauma ball with a hacking cough, sending it high and wide. Ness, with his superior height and reach, snagged it easily, holding it up to keep it out of reach.

Any second, Verin and Corny would charge him and then Shax wouldn't have a chance. An evil thought percolated in his mind, and he sidled up close to Ness, blew a breath across his bare nipple, and reached down to cup Ness's balls through the tight game shorts. A strangled whimper caught in Ness's throat. His jaw slack, eyes saucer-wide, he fumbled the ball and dropped it.

Shax caught it before it hit the sand, snatched a quick kiss, and bounded away toward the far goal. He slammed the trauma ball into the sphere just as it hummed over to yellow again.

His elation died when he turned to find his opponents glaring at him.

Shax spread his hands, his smile faltering. "What? It was all in fun. It's just a game."

"You used how I hunger for you."

"It was just a little squeeze, cupcake. Really, you're taking this too seriously."

"Yes. I take my feelings for you very seriously." Ness flipped his wings tight to his back, turned, and strode for the door.