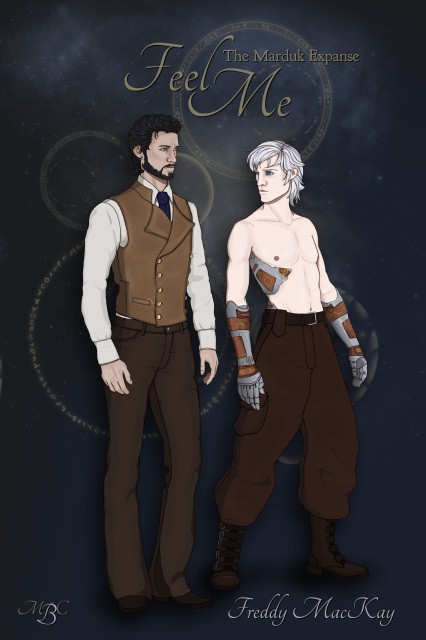 Feel Me (The Marduk Expanse)

One terrorist blast changed Master Tobias Zimmer's entire existence, relegating him to being nothing more than just a "Coppies" because of the metal replacing his flesh. As the once future Shogun of moon colony Orion 1, he now idles his time away keeping tabs on the Loyalists while his father and brother broker negotiations with the Earth Consortium.

A confrontation with his childhood enemy, Dr. Thorsten Nordenfelt, sets into motion events that cannot be undone and puts Tobias's sheltered heart at the center of the colony's attempts to free itself from the repressive Earth's rule.
Add to Cart

Late in seventeenth century, the industrialized nations pooled their resources to find new kinds of energy, ones compatible with their newly found steam power. Through telescopic magnification and unmanned rockets, they found the moon's surface to be rich in ores, minerals and a special type of helium that they could use in their ships, trains and carts.

A Consortium was built, consisting of a young nation called the United Americas, the British Dynasty, the Dutch Empire, the Swedish Lords, the Prussian Alliance, the Australian Bushwackers and the Japanese Empire.

Other countries soon bought into the Consortium as well, wanting their percentage of profits. The only question was how to get to the moon so they could have unparalleled resources. The answer came in a simple invention during the early eighteenth century, one developed for the increasingly towering houses of the Nobles.

Debates raged. Monies were thrown around. Committees formed. Political alliances were brokered and broken, sometimes in the same day. Eventually though, legal documents were signed and the plans for an elevator to space were made. Once in space, they could build a platform, and from that platform, they could travel to the moon and develop it.

The Consortium poured all their resources, energy and time into the Elevator, undoubtedly the biggest engineering and architectural feat ever undertaken by man. Decades and changing technology as well as alliances caused the building of the Elevator to be slow and often dangerous work. Many young men lost their lives on the project, but some were lucky enough to become old men.

By the time man reached space, several generations had been born, lived and worked on the bustling metal city of the Elevator, the people developing their own culture, language (Latium), moral codes and customs. There they had a new problem with which to contend. How to get to the moon? And more importantly, who would be controlling it?
When the people of the Elevator made it to the moon, they had harsh conditions to struggle against, but their spirit could not be broken. They were made of the sky already and could not be brought back down.

The colonists survived, thrived, and ultimately built a sustainable environment for families to live on the moon colony, Orion 1, because during the decades-long building of the Elevator, invention and innovation had become a life-force of its own, many men becoming great thinkers and modifiers of old technology and bringing new life to it and to the people.

The original engineers and developers of the space colony found themselves now the political juggernauts of the people referred to as the Masters, and the ruling family called the Shoguns. The Zimmer family has…


Lifting his foot off the metal depressor of the exhibit, Tobias sighed and took a step back. He had no desire to hear about the great Zimmers and how they created the bustling hub of Orion 1 with almost two thousand permanent residents. He knew the history forward and backward. He had to. Everyone did. Unlike everyone else, though, Tobias was the genius extraordinaire of the Zimmer family and the next Shogun of the colony. Or he was supposed to have been. Now he was relegated to being a nobody.

With new political implications coming down the pipeline from the negotiations planetside, no one wanted to be caught unaware, and Tobias's father wanted to make sure everyone sympathized with the colonists. The fresh set of treaty talks that had been ongoing for the last five months were why the exhibit had been installed in the Observatory last month.

Direct orders from Shogun Zimmer. "Keep people—colonists and tourists alike—up to date about Orion 1's history." Or, at least, tell the Zimmers' version of the colony's history.

Tobias took several steps away from the exhibit, his left leg dragging, grumbling about the state of the Observatory. It really should be cleaner than this. The metal segments had one too many scuffmarks on them. Litter could be spotted in a couple corners instead of in its rightful place in the Recyclers. Someone wasn't doing his or her job. Tobias made a mental note to radio the cleanup crew when he got back to his hub. They should get a sweep team to come through so the tourists wouldn't have anything to complain about when they took the transport back to the Elevator.

Darn it, his leg hurt. Tobias couldn't get his extremity to cooperate. Anger flashed through him like a hot spark of a miner's drill. Why did walking have to be so hard?

Needing a moment, Tobias stopped in front of one of the two largest windows in the colony, the one that gave the best view of the Elevator when they passed it during orbit and the best view of the planet. The other window, on the opposite side of the Observatory, gave the best view into space. Tobias's shockingly bright silver hair reflected off the glass momentarily before his face came into focus, his crystal blue eyes large against his white skin. He blinked and concentrated on the scenery beyond the window: the docking station and, after an empty expanse, the Elevator, standing tall and proud against the Earth like a beacon home for any weary space traveler from Orion 1.

With a tentative hand, Tobias reached out to the pane. Never had there been bigger ones synthesized. Normally glass was too delicate to have large panes exposed to the vast vacuum of space, but not these. These had a specially developed resin made from minerals on the moon that made them stronger than any metal. The rivets holding the window in place had a specialized sealer concocted from the moon dust that helped meld the metals and keep the hub airtight.

A sigh escaped Tobias when he noticed the warning on the bottom casing not to touch the window for too long; it could cause frostbite—and would for a normal person.

The glass should feel cool against his hand. Cold to the touch. But a person had to have the ability to feel to be able to discern things like temperature. Something Tobias didn't have, not in his hands or several other places on his body for the past seven months, not since the blast that almost took his life in the Arboretum at the center of the colony hubs. A lot of colonists died that day. Getting blown into space hampered rescue operations. Many more were hurt, not just Tobias. He hadn't been the only one to lose something that day, but had anyone lost as much as he had?

He had lost his inheritance of the colony.

Tobias withdrew his hand from the windowpane. Closing his eyes against the pain thrashing inside him, Tobias slowed his breathing like the doctor showed him and then opened his eyes again, observing the remnants of the attack.

The gears whirred and clicked as he stretched and clenched his new fingers over and over. He could see the device responding to him, following the directions his nerves were sending to the wires, tubes and gears, but his mind couldn't wrap around the idea that this cold metal was his, attached to him as permanently as his real flesh and blood hands once were.

Tobias clenched his teeth, holding back the pain, agony the doctors told him was all in his head.

It didn't do to dwell on phantoms.

With effort, Tobias put one foot in front of the other, forcing himself to walk away from the newly built Observatory constructed to replace the colonists' broken Arboretum. Their air supply was too precious to put at risk again.

Several people said hello as he passed by, but Tobias barely returned the gesture. It took too much effort on his part. Walking wasn't as easy as it used to be, especially in this low gravity. Each step forward meant his left leg had to shuffle to keep up, scraping along the copper flooring, hitting rivets and uneven flashing, not moving like it should. Considering he helped improve the design and engineering of the Sustainers, he had hoped his would work better than the models before them. No such luck.

Tobias lurched forward, grabbing onto a nearby walking bar. Dang. His leg was dragging more than it should.

Tobias stopped, banged the metal casing a couple times. The frustrating partial thigh replacement was acting up. It clicked and groaned instead of giving off a low hum like the gears should. He'd have to see Doctor Goldstein again.

Oh, now wouldn't that make Doctor Goldstein's day? Tobias hated visiting his Modifier. The doctor was, unnervingly so, creepy. Between the doctor's crooked smile and how he caressed the Sustainers, Tobias had to exert much-practiced self-control not to shudder when Doctor Goldstein touched him, even if Tobias couldn't feel it. The gestures themselves made Tobias feel dirty.

"You all right, Tobias?"

He looked up and saw Guardian Wu watching him with a worried expression. "Ah, my, um Sustainer seems to be having problems."

"No, I was actually on my way to the Ichiban for something to eat and some shopping," answered Tobias quickly. He needed to make rounds, make sure everything was running efficiently and take note of any unusual activity. "Essentials, you know. The stalls will be too busy if I wait for long."

Guardian Wu regarded Tobias, then sighed. "I suppose you're right. Need a lift to the Ichiban? The hub is still four sectors away, Tobias. That's quite a long walk…"

An awkward pause filled the space between them. For you is what Guardian Wu probably added silently. There had been a time Tobias would have as well: when he saw Coppies on the colony or the times he'd visited Earth. Now I am one.

"Tobias? Um, I mean, Master Zimmer?" called the Guardian, his great black eyes wide, overflowing with concern. Apparently Tobias had missed something. "Are you sure you shouldn't see Doctor Goldstein now? I can take you to him."

"Yes. I'm sorry, I've been walking a lot recently. Tires me out more quickly than I realized, but I'm well. The exercise is good for me."
A warm, gentle smile formed on Wu's lips. "I understand. Are you sure you wouldn't like me to call a Rikker at least?"

"No! I can manage!" said Tobias quickly, hating the flare of rage about to overtake his mind and proper manners. "As you said, the Ichiban is only four hubs away. Thank you, Guardian Wu."

"If you're sure, Tobias." The Guardian did not seem to be taking his dismissal well if the expression on his face was anything to go by.

"I'm sure." Pride, his pride, would be the ruin of Tobias. All the kind remarks and hushed voices dug in like a Modifier's blade, hurting worse, actually. At least the good doctor had numbing agents to ease the pain. "Need to build my stamina."