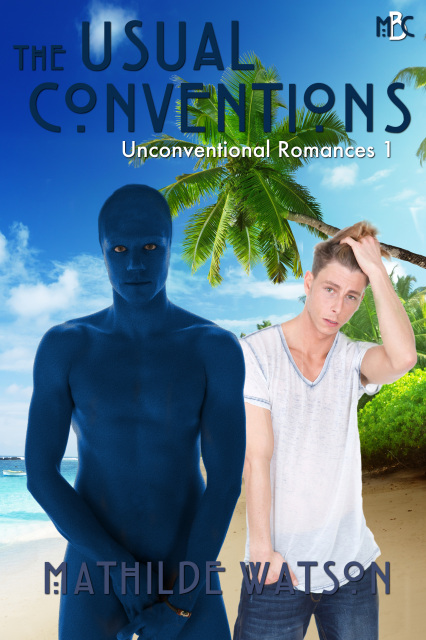 When Chris meets the alien—man—of his dreams, "Ensign Brodeich Geinn" aka actor Brody Gates, it's as one of the coordinators for the first annual OBX Science Fiction Convention in North Carolina. To his delight, Brody seems to return his interest, albeit in typical alien "Brodeich" fashion. Awkward alien or not, Chris is more than willing to play out any sexual fantasy for his SciFi crush, especially when Brody fumbles over the simplest of human conventions.
Add to Cart

Chris Myers stepped out of the elevator and jogged over to where his boss, Michael Glenn, was checking in guests and handing out identification badges. The man nodded to the others working the table and excused himself, stepping away from the chaos and joining Chris next to the back wall.

"Big day. You ready for this?"

Chris met Michael's gaze and nodded. After two years working for his friend, he finally convinced Michael to let him shoulder a little more responsibility. The first hopefully annual OBX Science Fiction Convention was the biggest account the Glenn Event Planning Company had ever landed, and Chris suspected he only caved out of sheer desperation. Still, Chris had control over an entire floor of the event, and he was determined nothing would go wrong on his watch.

Michael jerked his head in the direction of the front door, and Chris looked up just as the ragtag group of refugees from the Harec Y'shol walked into the hotel lobby. His jaw dropped and he knew his eyes had to be as wide as saucers. He could only hope he wasn't drooling as he watched Ensign Brodeich Geinn lead his companions toward the check-in table.

"Oh my god, Michael! I thought you said they wouldn't be here," Chris hissed.

Michael laughed and slapped him on the shoulder. "No. What I said was they hadn't responded. I didn't get the call until late Wednesday night."

"It's Friday morning. You could have told me yesterday!"

"You put them on my floor?"

Having Brodeich and his companions on his floor shouldn't have been a surprise, really. His floor consisted of the small exhibits featuring lesser-known characters from the more obscure shows. Competing against the latest Joss Whedon creation and the overblown Star Trek franchise two years ago, Brodeich's Landing had barely made a blip on the radar. The network didn't even air all of the first season before canceling the show, leaving a small but loyal fan base outraged.

"They're all yours, buddy."

Michael gave his arm a quick squeeze, then hurried back to his post at the check-in table. Chris resisted the urge to pinch himself. If this was a dream, he didn't want to wake up. Ever. Alien or no, Brodeich Geinn was the man of Chris's wet dreams.

Chris did his best to mask his nerves before he approached the daring deserter and the innocent prisoners he'd rescued from the ill-fated Harec Y'shol. He wiped his sweating palms on the outsides of his thighs just before he stopped in front of his fantasy hero.

"Hello. Welcome. We're so glad you could make it."
Chris stared up at the alien's alluring face and held out his hand, praying the man wouldn't notice how badly it shook.

Brodeich stood six foot four inches tall and weighed two hundred and eighty pounds, every bit of it muscle. He had navy blue skin so dark it was almost black, and his catlike eyes were a rich coffee brown. His large, hooked nose only had one nostril, and his ears were small holes behind his temples. He had no hair on his head or on his arms or anywhere visible, and Chris couldn't help speculating whether the trait extended to parts covered by his tight gray uniform.

Brodeich's long fingers wrapped around Chris's hand, his firm grip cool, smooth, and soft, like snakeskin. The press of their palms made Chris's heart race, and his mind conjured up images of them together as a couple, like in his fantasies. Brodeich would hold his hand as they walked through the park, and those same hands would caress his naked body when they went to bed at night.

Chris could feel the heat building in his face, and he felt sure he'd turned the color of a cooked lobster. He hoped to god he hadn't said that aloud, but judging by the snickers around them, the startled expression on Brodeich's face, and the sudden hard squeeze of his fingers, he had.

Chris cleared his throat and pulled his hand out of Brodeich's grasp, giving him and his four companions an awkward smile. "I mean, I'm a huge fan of the show. It broke my heart when the title disappeared from the station's listings."

"That is so kind of you to say. It…broke our hearts, too, losing the spot. Our story had only just begun."

Brodeich gave a sad smile that, coupled with his defeated tone, made Chris's chest ache. It seemed strange for such a soft, gentle voice to emanate from so large a man and for so much emotion to be conveyed in so short a speech. It was the quality Chris found most alluring, the way those musical tones settled in his belly and filled him with warmth, even when issuing from the television set. He stared in awe at Brodeich's expressive mouth, the smiling lips and pointed teeth so at odds and yet, somehow, just right. He caught a glimpse of a blue tongue and wondered how it would taste, how it would feel invading his mouth.

Chris shook himself out of the daydream. He had a job to do and it didn't involve standing about and mooning like a schoolgirl. He needed to get the actors upstairs to their booth so they could set up. The doors would open in less than an hour and thousands of Sci-Fi nerds would flood the halls and fill the ballrooms and conference centers.

"So, uh… I'm Chris Myers. I'm running the floor you all are assigned to so if you need anything, I'm the guy you need to talk to."

"Chris Myers. Thank you." Hielo, the young, headstrong half-blood Budgeon offered Chris a wide, toothy grin. "You are too kind." His heavily accented English was his second human language, having learned Spanish from his Guatemalan mother. Were it not for his ability to communicate using human words and his slightly more human-like features, their landing would have gone very differently. He had scaly green and light blue skin, but his eyes had round pupils, his nose boasted two nostrils, and human-like ears protruded from the sides of his head. Quill like spikes covered his head, folded down now, but capable of rising when he became upset like the hair's on a dog's neck.

Fuck! He really was a goner.

"Great. We've got a van full of merchandise outside. There are boxes of action figures, costumes, posters, and a few with Goldie's book." Tara Shaw, the human character who'd befriended the survivors when she discovered the crashed escape pod, broke into the conversation, pulling Chris's attention away from Brody.

Chris gave the intimidating, no-nonsense brunette a nod, acknowledging her statement before looking down at the small, pale yellow man lurking behind Brodeich's elbow. The character's orange veins were pulsing visibly under the surface of his translucent skin, and his goldenrod eyes were impossibly large and round. Chris smiled at the little guy everyone called Goldie, but he knew better than to offer his hand. The silent Gauldsthei couldn't bear the touch of strangers.

"Yeah? I would love to get my copy signed. It's an amazing book, man. I couldn't put it down. I read it all in one sitting. The way you write…" Chris took a deep breath, searching for the right words. "I felt like I lived through it all myself, the anguish was so close to the surface. The devastation of being ripped away from your home and your family, then the confusion of captivity. While I read, I could feel it eating away at my soul…" Chris shivered at the memory, then smiled sadly at the little guy. "I hope there will be a sequel. I'm waiting for the happy ending."

Goldie reached over and wrapped his hand around Brodeich's wrist. Brodeich startled and glanced down at his companion. He patted Goldie's hand and nodded, then looked over into Chris's eyes. "Goldie is waiting too."

Chris didn't know how to respond to the odd exchange. Unlike the rest of the talent he'd interacted with that day, the refugees from the Harec Y'shol were already in character. It made separating the actor from the daring hero all the more difficult. Chris was in for a very long weekend, he could tell.

"Well, I'll, uh, just show you where you need to set up," Chris said, breaking the uncomfortable silence and leading the group over to the elevators. "Then I'll send some guys to collect those boxes for you."