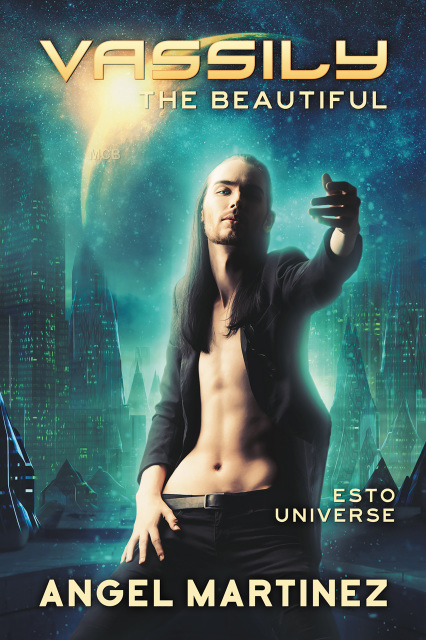 An explosion stole his father, his health and his independence. His new stepfather's about to take everything else.

Vassily Belikov, composer and pampered son of privilege, suffered neurological damage in the accident that killed his father. Resentful of being treated as an invalid, he lives as a recluse, dependent on his mother. That changes the day she brings home a new husband with two sons of his own.

When deep-space pirates capture Vassily's mother, he's left to the mercy of his cruel, amoral stepfather. Fighting addiction and his physical shortcomings, he's forced to seek out the criminal mastermind Baba Yaga for a crucial piece of equipment. While she agrees to deal with him if he beats his Exoticus addiction, paranoia and mysterious intentions infuse her household. Drawn to her fierce, suspicious youngest son, certain his actions are all carefully observed, Vassily must find the courage to face both his fears and his desires if he expects to survive.

Dusk oozed in, choking out the last feeble spots of daylight, the asphyxiation so gradual that Vassily failed to notice until he glanced up from his composition. The room had vanished, leaving his desk an island of light in an inky vacuum. He pulled in a shaky breath, anxiety skittering with spider feet up his back. The room's still there, it's still there…

"Lights, full," he called out and the room obliged, objects leaping back into solidity from one blink to the next. So stupid, so childish. After three years, I should be used to it. He tried to lose himself again in the music, minor fall, a third, a fourth, but his hands shook too much. He could sing the entries, but that always proved tedious, one note at a time instead of whole chords and progressions from his fingers.

The message signal chirped and Vassily gave up with a huff of breath as he tapped the receive code. "Mom? Are you on approach?"

"Hi, sweetie! No, still a couple days out." Her holo image frowned. "You're so pale. Everything okay?"

"You don't sound fine. Is Talia there?"

He forced his lungs to push against the tight bands squeezing his chest, hoping to quell the shaking. "I sent her home, Mom. She has her own family to look after."

"Yes, but I pay her to look after you when I'm not there."

"I don't need looking after," Vassily snapped and immediately regretted it. She's worried, you jackass. He pinched the bridge of his nose between thumb and forefinger. "Sorry. I'm sorry, Mama. It's just… I'm not helpless. Besides, Giorgio's just across the hall if I need any help."

His mother let out an unladylike snort. "Giorgio. A lot of help he'll be if he's drunk again." Her fist-sized image waved a hand. "Never mind, Vasya. Just promise me you're being careful."

He gave her a wry smile. "Because I live so dangerously, right?"

I do, Mama. I do, and that's half the problem. "I'm careful," he reassured her more gently.

"All right." She smiled for him. "I'll have a surprise for you when I get home."

"Oh? What sort of surprise?"

They said their goodnights and then the silence rushed back in like a dark tide. He rose from his chair, careful to keep one hand on the back in case his legs wanted to do their occasional rubber-band impression. They held. Thank you for small favors.

The house lights followed him as he drifted through the rooms, illuminating each new tableau before him, leaving puddles of black void in his wake. Vassily stopped, head cocked, when he heard footsteps in the hall outside. A moment later, the door speaker chirped.

He smiled as he palmed the pad by the living room archway. "I'm here, Giorgio."

"Are you all right? I passed Talia on the way up…"

Vassily snorted. "If Talia was leaving, why would you think something was wrong?"

"I get my best work done when I'm alone."

"And you have screaming terrors and an issue with falling and—"

By now, he had reached the door and palmed it open. "Over a year. I haven't had one of those night things in over a year."

His irritation fizzled out when he caught sight of his neighbor. A scarlet-sequined sheath dress wrapped Giorgio's nearly two-meter frame, clinging to his corset-cinched waist and rounded, muscular butt, the long midthigh slit exposing one sculpted depilated leg and that evening's silver stilettos. Thick false eyelashes blinked at Vassily as Giorgio pulled off his black shoulder-length wig with a sigh, his steel-gray buzz cut at odds with the soft fabrics and heavy makeup.

"Going out?" Vassily asked with a smile.

"On my way in, hon. Had a dinner show to do. Dead on my feet. Did you eat? And please tell me it wasn't one of those self-heating Quikmeals."

"Talia made dinner before she went home." Vassily backed up a step to let Giorgio in, hands held up to fend off further scolding. "And believe me, she made sure I ate every scrap before she'd go."

"Well, pardon the people who love you for worrying," Giorgio huffed as he leaned against the wall to slide off one shining spiked heel and then the other. "Come across to my place. You can talk to me while I de-glam."