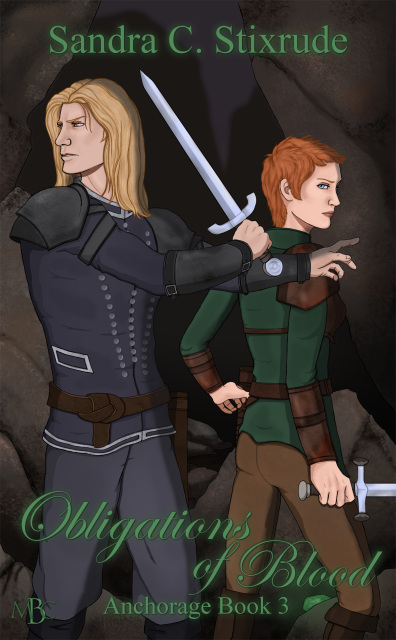 Ancient voices reveal a terrible secret: human scientists created the kresnas, devourers of life and sanity. Not only created, but also used in terrible, torturous experiments, turning them against their creators.

Romenel's dilemmas pile up until he's lost in them. How can he destroy all the hordes of kresnas at once and is it morally defensible to do so? What other solution is there if humans are to survive? What should he do about the beautiful warrior, Kyliki, since he has no place in her world and she has none in his?

And, hang it all, if he can resolve these things, what in blazes is he going to do about the mess of a succession war raging back home?


Liam asked for everyone's patience while he sequestered himself to work with the odd little boxes from the caverns. For a number of days, strange noises and voices issued from the room Father Rasmus had lent him as a work area, while his brothers often hovered near the doorway. Finally, he called everyone together to share what he had learned.

His eyes were shadowed as he asked everyone to make themselves comfortable. Romenel's original party occupied most of the space, all those brave souls who had insisted he needed them along on this strange journey. Marya sat cross-legged on one of the floor cushions, surrounded by her family, her husband Roke at her side, their little daughter, Roya, nestled beside them, their sons Harrel and Feren sprawled beside each other. Romenel's men occupied the other side of the room, his aide de camp, Sergeant Mardis, his scout, Bedaren, and his bodyguards, Tren and Joris.

The room would have been crowded with just his party, but Essi and Lastikka, assigned as Feren and Bedaren's protectors, were both off duty and Father Rasmus joined them, as well.

With a deep breath, Liam began. "These boxes are journals. Each one belonged to a different person. There are hours and hours of entries on each box, so I won't ask you to sit through all of it. I've set them up to show you what I feel is important to us. Each entry is a moving picture, as if the person were actually in the room with us, but it's just a picture and a voice from a time long ago. It's all a little strange, and a lot of the things you're going to hear are very distressing. I'm asking you to watch for yourselves, though, because there are a number of things I don't understand. I'm hoping that one of you will be able to, but please let me know if you find any of this too disturbing, and we'll stop."

"Thank you, Liam. We'll keep the warning in mind." Romenel looked around the room. "Anyone want to bow out now before we start? No shame in that."

"Good. Roya, would you come sit with me? I may need someone brave beside me before we're finished."

Roya snuggled in beside him on his floor cushion as Liam set up one of the boxes on the table.

"We'll spend the most time with this first one. Her account is the most informative," Liam announced. "She is, or rather was, a military officer, and her entries are more precise and to the point. The rest of the people are involved in more specialized occupations, and they tend go on about things I can't begin to decipher."

Liam pressed a circle on the side of the box and sat down next to his mother as the device hummed. Suddenly, the woman who had startled them so badly in the caverns appeared. She sat with her hands folded in front of her on the little white table they had seen there. Liam had the image working properly, and they could see her clearly now—a small, straight figure with short, midnight black hair and a sharp-featured face. Her gray-green eyes looked slightly amused, her mouth curved in the hint of a smile.

She began to speak in a quiet, precise voice. "This is the personal log of Captain Martina Escobar, Pilot-Commander of the star cruiser, Helios." She turned her head for a moment as if someone out of the picture were speaking to her. "Oh, yes, Emil reminds me that I was the commander of the Helios. Since we have landed, I am no longer pilot or officer. I am just Martina Escobar…"

"Liam, can you stop it for a moment?" Tren's voice trembled.

Liam pressed another circle and the sound stopped, the picture frozen at that moment.

"Quan-vadis, do you hear her?" Tren had a hand on Captain Roke's arm. "Do you see her?"

"I see her, my boy, and she looks oddly familiar," Roke mused.

"She looks like you, sir," Tren whispered. "Martina Escobar, Mardina Eschovar… quan-vadis, it's her. The first mother in the Nori line."

"Our Tren's right, love," Marya agreed. "Look at those eyes, that nose. She could be your twin sister. The sounds may have shifted slightly, but it has to be the same name, as well."

Roke put one arm around Marya and the other around Tren, pulling them with him as he leaned back against the wall. "Well, there she is, then. I suppose in a way, the claim that we sing our mother line back to the beginning is true." He shook Tren gently. "It's all a bit disconcerting, I know, but this is our history, my boy. Go on, Liam, let's hear what she has to say."

With Liam's touch on the box, she continued, "…private citizen. It has been two weeks since we arrived, and the colony is taking shape. We have temporarily occupied underground sites dug out by the auto-borers—individual quarters, the infirmary, meeting hall and the labs. A very practical solution to provide immediate shelter even if some of us"—her nose wrinkled—"are not entirely comfortable living underground. I should explain that this log is one of ten given by our historian, Sima Kumar, to a cross-section of the community. We are to record events and our personal observations for future generations. Each log also contains a limited amount of data space in which we may download library information from the link to Helios." She stopped and gazed at the ceiling.

"My Helios," she murmured. "I spent so many years with her, and now she will simply circle this little planet until her orbit decays and she is destroyed by atmospheric friction. It feels… so strange." Then she smiled and moved the device to display a different part of the room. "But I brought the best parts with me."

Now the image showed a small, wiry man with dark hair and a bright smile. He waved, grinned, and then returned to his work with some complicated metal device. The image of Captain Escobar returned.