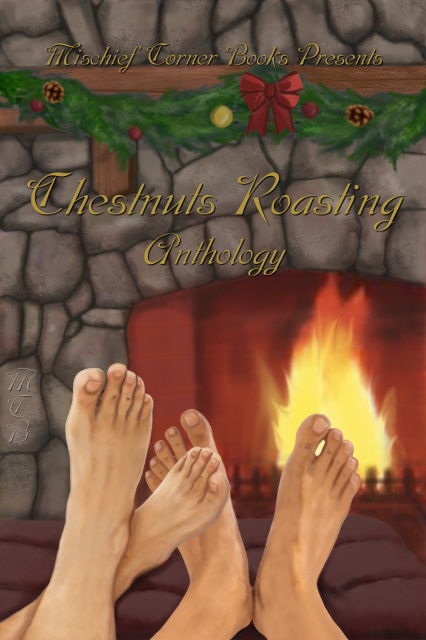 Christmas means different things to everyone, but most often it’s all about pulling loved ones close and brightening the gloom. The fire’s crackling. The snow is piling up outside, even if it's only in your dreams. Time to snuggle up with some cocoa and some stories carefully crafted by the Mischief Corner Crew to warm hearts and cockles.

Wreath of Fire: Smokey Mountains Bears 2 - Toni Griffin
Michael's trying to start a new life away from his abusive father, but he's drifting and not sure what he wants. When he accidentally starts a kitchen fire, the hot new fireman who comes to the rescue is not only another bear shifter. He's Michael's mate. Michael desperately needs to get his act together and figure out what he wants if he has any hope of claiming the bear fated to be his.

A Christmas Cactus for the General - Angel Martinez
Exiled to Earth for perhaps the worst failure in Irasolan history, General Teer must assimilate or die. Earth is too warm, too wet, too foreign, but he does the best he can even though human males are loud, childish louts whom he can't imitate successfully. When a grieving seaplane pilot strikes up a strange and uneasy friendship with him, he finds he may have been too quick to judge human males. They are strange to look at, but perhaps not as unbearable as he thought.

Holly Jolly - Silvia Violet
I’m not gay. I just notice men sometimes. Everybody does, right? I notice Dane a lot, like every time I’m near him, but just because I think he’s an attractive man that doesn’t mean I like him, does it?

I’m also not a fan of Christmas. Too many years “celebrating” with my Bible-thumping family ruined the holiday for me. So what if I envy all these cheerful souls dashing about with smiles on their faces? I don’t have to like Christmas, do I? If anyone could get me in the Christmas spirit, it would be Dane with his easy, relaxed manner and his gorgeous smile. If that were going to happen, though, I’d have to find the courage to talk to him and to admit that maybe I don’t know myself all that well after all.

Snow on Spirit Bridge - Freddy MacKay
Alone in Japan, Finni is struggling against the constant distrust, avoidance, and xenophobia he experiences every day. He misses home. He misses his family. Nightmares come all too frequently because of the stress, and well, Christmas is just not Christmas in Japan. Not how he understands it.

Distressed by how miserable Finni is, his roommate, Mamoru, offers to be Finni's family for Christmas. Little does he know how much one agreement would change everything between them, because both of them kept secrets neither ever dreamed were true.
Add to Cart

Michael McKenna shook his head. "Christmas is a time for family. I'm not family," he tried to argue.

"Rubbish." Patricia Packard snorted. Michael stared at her, not believing the noise that had come out of her mouth. The woman had been Alpha, for crying out loud, he somehow expected her to be a little more polished.

"Michael." Patricia sighed, sounding so exasperated as she brandished the egg-covered pastry brush in his direction, bits of liquid egg flinging everywhere. "You are a member of our sleuth. This automatically makes you family whether you share our bloodline or not. You should know this."

The woman didn't give him a chance, just talked right over the top of him. "Plus, where do you think you're going to go? Huh? Christmas dinner is being held right here. You live here, for heaven's sake."
Michael grunted.

"You're celebrating Christmas with us and that's final. Or do I need to call Christian and get his ass over here to tell you?" The hard stare of his former Alpha and the no-nonsense tone was enough. He knew when he was beat.

Patricia smiled broadly at him, then went back to egg washing the pies for dinner. "Would you be a dear and clean up that mess for me?" she asked, pointing to the specks of spattered egg all over the counter.

"Sure." Michael grabbed a washcloth from the sink and wet it before ringing it out and heading over to clean up the mess. He looked around to make sure he'd gotten it all, and when satisfied, he rinsed out the cloth and hung it over the faucet. "Do you need a hand with anything else?"

Michael nodded and left her to it.

That had been three days ago.


A Christmas Cactus for the General by Angel Martinez


So much water. General Teer checked the boards again, but he had read his instruments correctly. In the entire vast universe, there were bound to be planets such as this one, but his Irasolan brain refused to accept it. So much water.

Granted, much of it was saline, but those huge salt-laden expanses drove weather patterns. There would be rain more than once every few years. Enough rain that plants grew on the surface, huge plants in some cases, the likes of which he could not have imagined in dreams.
Oxygen levels ran a bit high, the average temperature too warm for comfort. I have only two choices remaining, though: acclimate or die. Perhaps it would be better…

No. His Exalted Keeropness had taken that from him. Denied an honorable execution and sent into exile, his last shred of honor would burn in the winds of this alien sun if he took his life now. No one would know, of course. Still, the idea was too repugnant to entertain for more than a moment.

Teer tapped into the record pod to send his final message home. "I, General Teer of the Second Horath, hero of the Violet Day Offensive, acknowledge my arrival in orbit around the planet of exile. I confirm that I have no knowledge of this system's coordinates. My stasis sleep remained uninterrupted throughout transit. I failed you, Karet. For that, I am deeply sorry. For the good of the people and the Keerop, I resign myself to this uncharted gravity well. May the mother of seeds have mercy on me."

With a sharp hiss, the landing pod closed around him, molding to his body so tightly he felt he would suffocate until the inner membrane began to feed him oxygen in little sips, just enough to keep him alive. The edges of his vision darkened. It was better to make these pod flights half-conscious.

The words of an old spacer's prayer whispered in his head as the pod launched. I step out of the great night into the unknown. May the gravity pit's clutching embrace leave me breath and bone.


I shook my head as I watched Shelley toss back another shot. Her face looked oddly green in the glow from thousands of colored holiday lights, part of the Tacky Christmas theme the office decorators had apparently gone for. Shelley's day had been hellacious. No one could deny that, but getting trashed at the office Christmas party wasn't going to get her any closer to the promotion she wanted.

She slammed down her glass and shouted at Dane, the bartender, for another. If he hadn't glanced her way, I would've doubted he'd heard over the blaring strains of a squeaky-voiced rendition of The Christmas Song that would've made Nat King Cole slam his head against the wall.

Dane handed a glass of white wine to an older woman from investor services before heading our way. I couldn't help but notice the line of his jaw, the softness of his lips, the scruff on his face. I usually found the scruffy look obnoxious, but on him, it looked anything but.

He usually worked in The Coffee Bean, a shop in the lobby of our building, and a few times—okay, maybe more than a few—I'd gotten a second cup of coffee just to catch a glimpse of him. The thing is, I'm not gay. I mean—yeah, I've noticed men before, but it wasn't like I wanted to sleep with them. I was just acknowledging that they looked good. Sculpted bodies, soft, well-trimmed beards, a beautiful pair of eyes—I was appreciating them, like art.

But I couldn't fathom the intensity of my attraction to Dane. If he was anywhere near me, I was instantly aware of him. And when I thought about him, about what it would be like to… No, I didn't need that kind of complication. I no longer believed it was wrong to be gay, despite what my parents had drilled into me as a kid. It just…wasn't me. I'd been through enough changes in the last two years. I'd cut myself off from my family, from their expectations, from most of my childhood friends. I couldn't pretend to be who they wanted me to be.


There should be snow. Lots of it. Moreover, it should be below freezing with clouds, not this sunny and fifties crap. People should be huddled together and hurrying to get inside. It didn't feel like Christmas otherwise.

With a sigh, Finni glanced around the train platform.

If he'd been home in Chicago, snow would blanket the streets and salt would crunch under his feet. Shop windows with mannequins would line the Magnificent Mile with Christmas winter scenes. The tree would be up at his parents', decorated with bright lights and homemade ornaments he and his siblings made over the years. One or two presents would lie under the tree as a teaser for the younger cousins. Warm drinks would be waiting for him as he stepped through the door and brushed the snow off his coat. His family would smile at him and voices would call out to him.

If he'd been home in Chicago.

A big, bustling city, yes, but not home.

As people hurried from one shop to the next, got on and off the trains, and ran about in their jackets and sweaters, Tokyo couldn't have been farther from home. Yes, decorations were up at cake shops and at the department stores, but they weren't the same. The plastic Christmas trees seemed more likely to come alive and hunt people down than give off a relaxing pine scent. They didn't give off the same cozy family feeling Finni connected with. Everything was geared toward couples.

Since when was Christmas about couples?

A pang of loneliness ate at Finni's gut. All he wanted was his parents, his brothers and sisters, and his cousins, aunts, uncles, and some snow. He needed to see everyone was happy and okay. Was that too much to ask for?

A chilled wind blasted Finni, and he looked up, expecting the train, but nothing rattled down the tracks. Other people grabbed their coats and hunched. Some young girls squealed and huddled closer to each other. Finally, a shiver wracked Finni, clueing him in to the unusual temperature drop.