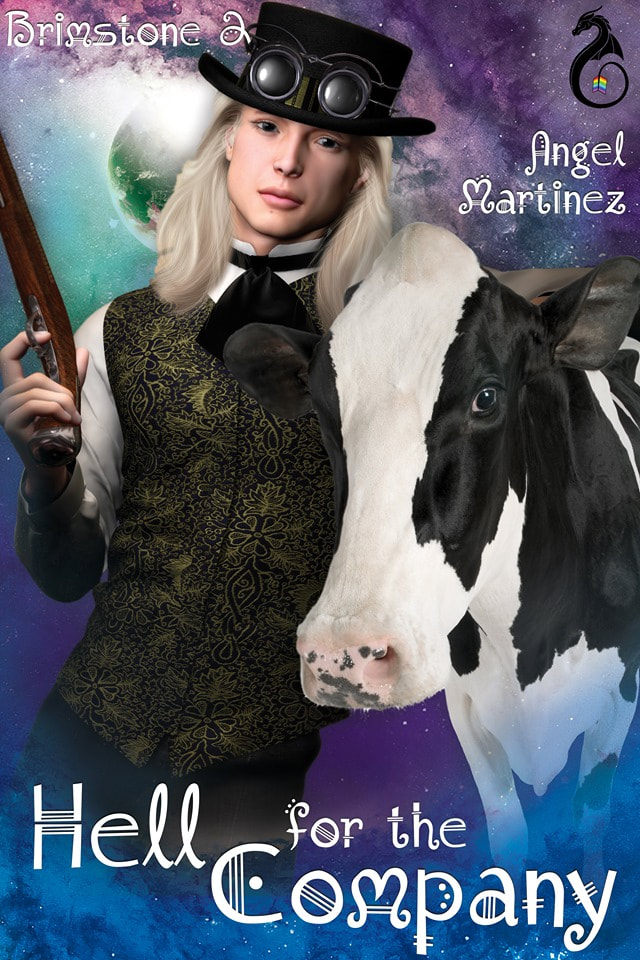 Hell for the Company: Brimstone 2


Just a few golden feathers – what could possibly go wrong?

Shax, the Demon Prince of Thieves, has reconciled himself to exile. He has a grand time careening around the galaxy as a high-end, intergalactic purloiner of pretties. Everything's going just fine, thank you very much. All right, fine, the anti-gravity cows are a bit problematic and some of his buyers are bad for his health, but he manages until he comes across an injured angel in a psychedelic alien jungle.
He only rescues the wing boy for his golden feathers, but what Shax doesn’t know about angels could fill an intergalactic encyclopedia. Ness, since his full, angelic name is too much to deal with, is shockingly naïve and seems convinced that Shax and Verin have brought him aboard to torture him or perhaps eat him. Little by little, Shax begins to earn his trust in the quest to wheedle a golden feather or two from him until to Shax's dismay, the yearning after pretties becomes a different sort of yearning entirely.

Bullets pinged off the rock beside Shax’s head.

He ducked lower and tapped frantically at his link, hoping it hadn’t taken damage. “Verin! You there, bud?”

A low growl came back through the link. “This better be—fuck! Is that gunfire?”

“Maybe,” Shax conceded as he flattened himself in the dust.

“What in Lucifer’s name did you do now, bonehead?”

“Um, there were pretties…”

Verin’s cussing became too heated and high decibel for him to continue the conversation for a moment. Finally, he stopped the tirade. “Get back here, then! Fast as that damn horse you borrowed can manage!”

“Got shot out from under me. I could, ah, use some backup out here, Ver.”

More grumbling came through but this time accompanied by the sounds of engine startup. “You at least get your damn pretties?”

Shax grinned despite the dire situation. “Oh, yeah. Show you when we’re off this dirtball.”

Engine noise drowned the next round of grumbling. Thank hells. Verin was coming for him. Not that a little thing like a gunshot was going to kill a prince of hell but damn it, being shot hurt. Maybe some demons got off on the whole pain thing, but he’d rather skip it, thanks.

“There’s nowhere to go, scum!” the local protector of law and order bellowed. “Give up now and we’ll most likely hang you all nice and humane instead of skinning you alive!”

Oh yes, now there’s incentive for you. The shooting had stopped for a moment, so he dared to poke his head up above his rock cover. “How about a third choice?”

Shax rolled his eyes at the incredibly witty rejoinder. “How about I go away and you never, ever have to see me again?”

He offered his most charming smile, then dove for the ground, swearing a black streak when bullets zinged around him. Ow. Shit. He pushed his hat back, probing gently at his scalp near his right horn. His fingers came away bloody. “I am never going into any bar that has a piano player, ever again. Cheap, shoddy, hick town. Stupid humans.”

The roar of the Brimstone’s engines briefly muffled the gunfire. Shax thought his partner would come in shooting but Verin often had more precipitous solutions. He simply set the ship down on the posse.

The few townsfolk who were not under the ship galloped off, suddenly keen to be elsewhere. The loading ramp lowered with the bitchy whine of old hydraulics. Verin stood at the top, huge arms crossed over his chest, tapping one clawed foot on the deck plates.

Shax staggered out of his hiding spot, trying hard for an annoyed expression rather than one of profound relief. He pointed to the hull as he stumbled up the ramp. “I am not cleaning that mess off.”

“Idiot.” Verin snorted. “The mess’ll freeze the second we leave atmosphere and burn off the next time we do reentry. So damn planet-bound still.”

“Shut up. Am not.” Halfway up the ramp, Shax stopped. “Why’s the ship crooked?”

Shax was about to admit he didn’t feel so great, either, when the loading ramp inconsiderately leaped up and hit him in the face. The last things he heard were Verin grumble-cussing and soft mooing.

The headache wasn’t as bad as the ones after a bad tongue-lashing from the boss. Humans thought that was just an expression. Ha. The Prince of Darkness had some of the most ingenious punishments. Still, Shax wasn’t in any hurry to get up.

Verin had dumped him in his cabin, probably to get him out of the way and secured during liftoff.

“Would’ve been nice if you could’ve taken off the boots, Ver.” Shax swiped at his blankets, trying to get some of the dust and sand off. Filth was not his modis operandus. Wasn’t usually Verin’s either, but sometimes Verin just couldn’t be bothered with small details.

He stripped and put the dust-plagued clothes in the dry-cycler. He’d deal with rips and scuffs later. The shower was sonic, better for water conservation, but it did have the luxury of a warm air jet massage, one of the reasons he had taken the captain’s cabin. Verin had the pilot’s quarters, equally well equipped.

Designed for a crew of six, the Brimstone was more ship than they needed but Verin did well with the flying part and he did well with the mechanics so they had no use for a pilot or crew. Since they had no need for a ship physician either, it was just the two of them, which suited them both fine.

Shax fingered the bloody line that parted his red-gold hair beside his horn. Pissed him off that those idiots had temporarily marred perfection. His horn hurt, for hell’s sake. Otherwise, he still looked good. Oh fine, his black eyes were a little bloodshot and a nasty bruise colored his jaw. He needed rest and pampering, but Verin sure as shit wasn’t going to do any of that and he’d left the minions behind on Earth.

He pulled on comfortable old work pants and a sweater, shrugged on his jacket and shambled off to the kitchen. While he wasn’t really in a mood to deal with computer snark, he needed his damn coffee.

Lights came up as he entered. The bench slid out from under the counter to welcome him. “Ivana, coffee.”

“How about you ask nicely, handsome?” the lisping CG voice purred. The damn computer had been programmed with a drag queen personality and neither he nor Verin could figure out how to change the settings.

“Ms. Ivana Cockatoo, might I have some coffee, please?”

“That’s better. Now why are you out of bed, sugar? You look like five light-years of bad road trip.”