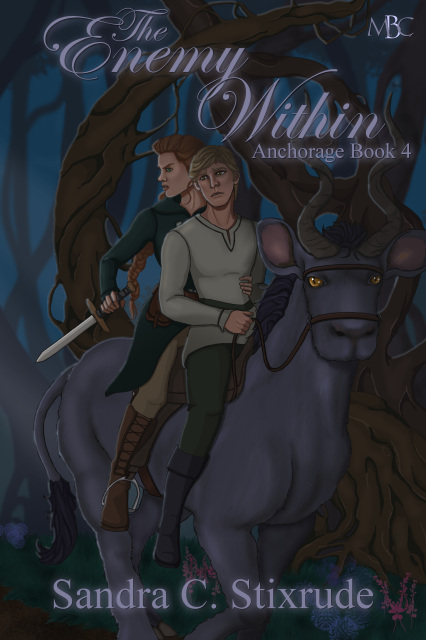 The Enemy Within: Anchorage Book 4

Exiled and disinherited, Pelinas finds refuge with his father's enemies. But his mind holds dangerous secrets locked away, ones he fears he won't unravel before he does immeasurable harm.

Starved and ill, Pelinas finds himself at the gates of Arhanna, the city of his father's enemies. He doesn't recall how he came there, though he remembers vividly his father disowning him. Luckily, the kind-hearted General Devar takes him in.

Roya Intalva returns from the Academy up north to take her rightful place in the Ktar's forces only to find that her friend, Romenel, has taken on a new aide whom she does not trust and the troops are succumbing to a mysterious illness.

Intrigue piles upon intrigue and when the walking dead kidnap Duke Semis, it falls to a group of green cadets, a prickly young Lieutenant and the haunted, guilt-ridden Pelinas to ride to the rescue.

"Don't be nervous." The lieutenant's gray eyes regarded him with sympathy. "He only looks imposing. He can't help his size, and he's really very nice. Be straight and honest with him. It hurts his feelings if he thinks he's being lied to."
He had no intention of lying to the general. Still, he couldn't stop his hands from shaking.

"Wait here a moment," the lieutenant said. "Let me make certain he's free. Wouldn't be a good start to have you interrupting an important conference."

He sank down onto the bench next to the office door, buried his head in his hands, and drew a long, shaky breath. It had been hard enough to come back here, and now he had to speak to this general, something he hadn't anticipated. He had probably made a horrible mistake. They would hear who he was and they would hold him captive, torture him, or have him publicly executed. Maybe he should run.

The lieutenant's boots arrived back in his line of sight at a brisk walk. "Are you all right?"

"I'm fine." He swallowed hard and scrambled to his feet. His vision blurred and all he could make out was the lamplight shining off the young officer's silver buttons and glossy black braid. He caught himself on the wall and his sight slowly cleared.

The lieutenant shook his head. "No, you're not, but go on in, see him first. He'll probably send you to the infirmary, but we'll let him make that decision."

He knocked on the office door and turned the knob with a trembling hand when someone bellowed, "Come!"

The scene in front of him caught him by surprise. A large blond man in the black-and-silver uniform of the Ktar's service knelt on the floor and rummaged through a wooden campaign chest. His shoulders looked as wide as the doorway, and he was easily two hundred and eighty pounds of solid packed muscle. He tossed things about, grumbling to himself.

"Hang it all, Harrel," the large man growled, "where's the red tea? I can't drink that green stuff."

"On the table, where you left it, My Lord General." The lazy, drawled reply came from the chair by the fire where a long, lean man sprawled, strumming on a stringed instrument of black wood and ivory.

Oh, gods, I've had it now. The large man was General Devar, whom he had seen on the field, but never up close. The general could easily snap him in half. That was bad enough, but the other man was Captain Harrel, the commander of the general's personal guard, and that terrified him. All the stories he had heard portrayed him as a psychotic sadist, given to uncontrollable rages that sometimes took the lives of his own men.

The general stood and dusted off his knees. "You could have said something." Then he turned and spotted his visitor. "Well, hello there, young man! Come in, come in. Sit down." He waved a huge hand at a chair near the desk. "I understand General Roke sent you over to me. Something about my being better equipped to deal with lost souls." He palmed the box of tea and the teapot in one hand and gently removed Captain Harrel's feet from the grate with the other hand so he could reach the hook for the kettle.

"Would you like some tea?" He looked his visitor up and down. "You look like you could use some."

Odd way to begin an interrogation. He eased into the indicated chair. The general brought him a cup and he flinched as the huge man brushed past him to take his chair behind the desk.

"Not too hard, anyway," Captain Harrel muttered. He hadn't moved from his place by the fire.

"Relax, please," the general told him. "Let's start with your name and why you came to see General Roke in the first place."

The teacup rattled so hard against its saucer he had to put it down on the desk. He swallowed hard and met the general's eyes, warm hazel eyes. How he hoped the general might be as kind as those eyes implied.

He took a deep breath and murmured, "Sir, my name is Pelinas Marat."

Pelinas heard the soft hiss of steel drawn behind him and he knew Captain Harrel had risen from his deceptively lazy posture with his sword in hand. Pelinas stared at his hands, unwilling to look. The tip of the blade touched him under his chin, forcing his head up and around to the right.

"One of Duke Per's, are you?" Captain Harrel's voice was soft and menacing. "Actual son, or poorer relation?"

With those coal-black eyes burning through him, Pelinas found he couldn't answer properly. He closed his eyes and whispered, "Please, sir, a… an honorable death…"