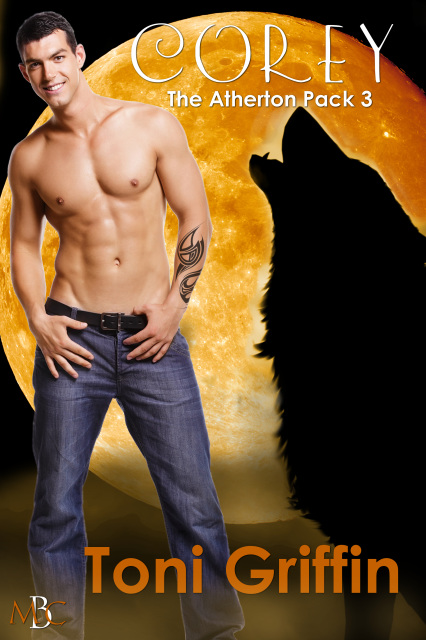 Corey Jones has always maintained he didn't want a mate. After falling for his college professor and having his heart broken, he vowed to never go there again. Now, his decision to remain single is put to the test when he meets his Alpha's new personal assistant, Ethan Davies, and discovers the man is his mate.

After growing up in the foster care system all Ethan ever wanted was a home and someone to love him. He's overjoyed that his recent move has brought him to his mate. Ethan's happiness soon turns to devastation when Corey walks away from him and their bond.

Ethan is forced to walk a fine line between respecting his mate's wishes and refusing to give up on the one thing he's wanted his entire life. With Ethan's determination, an interfering brother, and pack members too interested in his personal life, Corey may not stand a chance.

Please Note: Corey has been re-edited, and expanded, by ~13 K.

Corey sat in his classroom and stared, his elbow on the desk next to his laptop, his chin resting in his palm as he drooled over the professor lecturing up front. God, the man was too damn hot for his own good. Professor William Knowles's deep husky voice flooded Corey's body, doing all kinds of things to him.

He wondered if the professor talking dirty to him would be enough to make him come. Surprisingly they hadn't tried that yet. He would have to ask William to try it next time they met.

Corey sighed. He knew it was wrong of him to get involved with his professor, but Corey hadn't been able to help himself. He'd vaguely remembered seeing the man around the campus during his first year there. It wasn't until his second year when Corey walked into a class and Professor Knowles had been standing at the lectern that Corey really knew what lust at first sight meant. He'd walked into his class, caught his breath, and stopped dead in his tracks. Corey had been shaken out of his reverie when he'd been knocked into from behind.

It had only taken a fortnight before he'd ended up in the man's bed. Corey shivered as he remembered the first indication that William Knowles might have been interested in a little more than a strict teacher-student relationship.

Corey had stayed back after class to ask the man a couple of questions about a coding problem he was having. He remained seated with his laptop open. William had come over to him and placed his hand on the table, leaning over Corey so he could see the screen. Corey inhaled deeply, warmth spreading through him from the heat of Knowles being so close.

His wolf growled softly, letting Corey know he wasn't happy with him lusting after this man. Corey's wolf may not have wanted Professor Knowles, but Corey sure did.

"Now let's see what the problem is."

The hairs on Corey's arms stood up as the professor lightly ran his hand down Corey's forearm before the man reached for the touchpad. Corey's mouth filled with saliva, forcing him to swallow loudly before he could talk.

"I-it's j-just this section here I'm having trouble with," Corey stuttered out as he pointed to the screen.

"That doesn't seem to be the only place you're having a little trouble at the moment."

Corey wasn't sure what the man meant and looked up at him. "Hmm?"

William's gaze trailed down Corey's body until it came to rest on Corey's crotch. The large bulge in his pants was obvious to anyone who saw it. Corey blushed, embarrassed at his body's reaction, and quickly tried to cover it.

"Don't be, I'm flattered," he whispered in Corey's ear. Corey shuddered. He could have sworn the man's voice had lowered and sounded all hot and bothered. Corey had to check. He moved slightly and glanced down, and sure enough, the professor also sported a sizable bulge in his grey slacks.

It didn't take long for them to go from blow jobs in William's office to him inviting Corey over to his townhouse and spending the night in his bed. The sex was great. William really got off on getting fucked hard and deep. With Corey being a shifter, he was more than able to comply with the man's demands; all that added power and strength worked wonders in the bedroom.

Now a year and a half later, Corey sat there staring at the man he was sure he was in love with. There had been candlelit dinners and long drives on Sunday afternoons just so William could take Corey for a walk on the beach at sunset; there had also been pizza and beer on the couch as they watched football or a movie, depending on the day. Corey hadn't yet met another member of William's family, but he was sure that would all change as soon as he graduated.

Corey understood the need to keep their relationship quiet, as much as he disliked not being able to shout it from the rooftops. If he did, then William would more than likely lose his job, and that was the last thing Corey wanted to happen. William was a great teacher. He was always willing to stay back and help whenever anyone was having trouble.

Would Corey like to be able to spend more time with the man? Sure, but he understood that they had to be careful. They usually could only get together two or three times a week due to their schedules. That didn't stop them from talking via text message on the days they didn't see each other.

Corey watched as William stood up front and worked his way through the lecture. He wished the man would look at him and smile just once, but that didn't happen. It had never happened in any of the three classes Corey had taken that William taught. William had told him that he couldn't be seen as having favourites in the class in case anyone became suspicious. Corey had reluctantly nodded. He didn't like it, though.

As soon as he was done with school in another couple of months, he wasn't going to hide their relationship anymore. Corey hated hiding. It just wasn't who he was. Eighteen months of it had been hard on him, but like had grown to love over time, and Corey would do anything to make William happy.

His wolf, who had lightly disagreed with him about a relationship with William in the beginning, was starting to become more forceful about his dislike every time William came close. This made things especially difficult for Corey.

A hard nudge in his ribs had Corey jumping in his chair and looking at Katie, who always sat next to him. "Pay attention and stop drooling," she whispered.

Corey nodded his thanks and sat back, trying to concentrate on the words William was saying and not the man who was saying them.

Before Corey knew it, the class had ended and everyone around them stood and started packing their bags before filing out of the room and heading to their next lecture.

Corey stood with everyone else, and when everything was put away, he glanced one last time at his professor—who was paying a great deal of attention to some papers spread on the lectern—then grabbed his backpack and slung it over his shoulder before walking out the door, Katie chattering away in his ear. He wasn't paying any attention to what she said; instead, all Corey could think about was seeing William again.

They weren't due to see each other again until Thursday and it was only Monday. Corey didn't think he could wait that long.

A plan started to formulate in his mind of what he wanted to do. Feeling lighter than he had since he'd last seen William on Saturday, Corey stood tall, and if there was a little extra bounce in his step, then so what? Corey couldn't wait, and so he was going to see his man tonight and. The mere thought had his heart racing and his dick stiffening. His wolf, on the other hand, growled low and long at him. Corey ignored his animal.