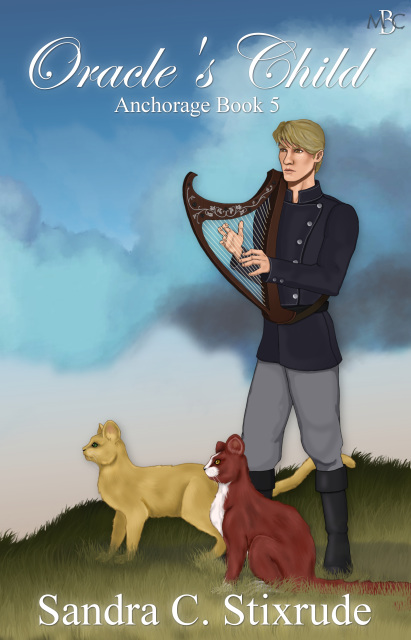 Determined to kill his father for his crimes again humanity, Pelinas resolves to live until the Duke of Korval is dead. Beyond a burning desire for revenge, though, he has no solid plan to accomplish what seems impossible. Duke Per leads a massive army, controls frightening technology, and even commands the dead.

But the Duke of Korval has eleven other sons, many carrying their own dark secrets. When Telluris Marat reveals strange and terrible facts about Pelinas's heritage and his birth, new possibilities unfold. He might attain all he desires—but will the cost be too high for him, for his friends, and for the entire continent?

Riders at the Gate


The sky shone brilliant blue, the breezes whispered soft and mild for so early in spring, and the air was warm enough for Roya to leave her coat on its peg. Liam had declared a holiday. There would be no work, shops were closed, and the garrison troops were off duty except for essential infirmary personnel and those on watch details.

I am an adult today, officially, truly.

With Roya's sixteenth birthday, the world overflowed with possibilities. Now she could enter into legal contracts and binding oaths. She could buy property, captain a ship, take her royal titles officially, if she wished. She had a vote now in court sessions, could petition to be heard, and could add her voice to any debate in the grand audience hall.

I could even marry now, if I want.

That thought brought her up short. Now that she was of age, she would become a prime candidate for every ambitious noble and ducal son. She was the Ktar's only sister. What more prestigious match could anyone hope for? She groaned, thinking of how she would be pestered and plagued with suitors she didn't want—hordes of boring, useless, pampered brats.

If I ever marry, it will be for love, regardless of the man's rank or station in life.

Titles didn't make a man courageous, talented, or honorable. In most cases, they just gave him a high opinion of himself. There were exceptions, of course. Both Pelinas and Tevril could, by right of birth, be addressed as 'My Lord'. Pelinas was a duke's son, and Tevril had become the rightful lord of the tiny Armadian hill region of Onsic after his father's murder. Neither young man had ever insisted on the use of their titles, and neither one was arrogant or high-handed about his noble blood. Now, Devrin was a commoner, a fisherman's son, and he could be arrogant and haughty at times, but it was more to keep people at a distance than out of snobbery.

There I am again, always back at those three.

Tevril, Pelinas, and Devrin. They were all so different, so wonderful. She leaned her head against the window and blew out a long breath. Was she doing the wrong thing, seeing them all at once? She had been honest about not having an exclusive relationship with any of them, but were they truly as tolerant of her spending time with others as they said? If someone had told her that she had to make a choice, she wouldn't have been able to. She couldn't bear the thought of giving up any of them.

"Your Grace?" Captain Brevin knocked on her open door. He seemed amused about something. "You have visitors, suitors awaiting your pleasure."

Roya cursed softly. It was starting already. "I don't want to see them, Brev. Stupid, snot-nosed, rich brats," she told him petulantly. "Can't you tell them to go away?"

"Now, Your Grace…" he said sternly, but she could feel him laughing inside.

"And don't call me that!" she wailed, suddenly upset about being a grownup.

He joined her at the window and settled an arm across her shoulders. "I'm sorry. I shouldn't tease you today. It's going to be confusing enough for you now. But listen, my young friend, you've reached your majority today, and more will be expected of you. Yes, you're going to have suitors you don't like, but most of them will be the sons of rich and powerful men. You need to treat them with tact and diplomacy when they ask to see you. Be polite, be charming and engaging; it's all part of your obligations. However, there are subtle ways to let them know you're not overly pleased with their attentions. Don't pay them any direct compliments, don't accept their gifts with your own hands, and keep the visit short. You're a very busy young woman, after all, with your career and your family and certain guard captains who might need to consult with you on security matters at any given moment."

"Oh, Brev!" She laughed. "You'd come and interrupt for me! All right, I'll go see them. Where are the noble brats cooling their heels?"