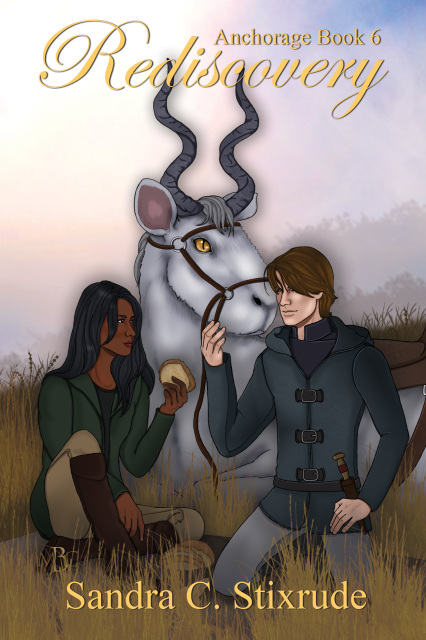 An inhabited planet is not what an interplanetary mining company hopes to find while in search of rare mineral deposits, but the low-tech natives should be won over by a few ‘miracles’, right? Emily Nandi, the mining company’s legally mandated xenologist, isn’t so sure. The planet’s social structures are complex, fascinating and frustrating – she advocates research and caution rather than the seat-of-the-pants first contact the company president wants.

Investigator Shadow is convinced ghosts are watching him until a fellow investigator disappears, plucked from his harduk’s back without a trace. When he reappears at the city gates, naked, half-frozen and ill, he brings back a harrowing tale of strangers on a ship high above the planet.

From this shaky beginning, suspicion and misunderstanding fuel one culture-clash driven disaster after another, punctuated by apocalyptic prophesies from the oracle, Telluris. This is no way to get to know one’s long-lost cousins from Earth.

The waking cycle proceeded, as always, with the speed of half-frozen syrup. Emily knew perfectly well she wasn't 'essential personnel' when the crew emerged from jump sleep. The accelerated cycle drugs were expensive and couldn't be wasted on her. Still, it irritated her to be one of the last ones awake, always the last one to straggle onto the bridge, where she would need to ask a hundred questions to catch up.

She couldn't decipher any of the garbled words yet in her half-waking state, but an unusual amount of chatter came over the comm system.

Leon would tell her. No matter how tired he was from the jump, he would always stop by her console and lean against her chair to fill her in. Then he'd stretch until his spine popped and say, "Gotta catch some z's, Em. Dead on my feet," before he staggered away to his rest.

Leon Kosciusko was the Venture's only jump pilot. While the rest of them slumbered through faster-than-light travel, he stayed awake, fought the currents, and kept the ship together. It might have been less of a strain on him if he'd had a relief pilot, but jump jockeys were a precious, costly commodity. The company wasn't willing to finance more than one.

Emily drifted further toward waking. The lights of the cubicle grew clearer, and suddenly the comm chatter resolved into distinct words.

"…medic up here for Leon! Now!" Robbie roared from the bridge.

"Already on their way, McPherson." Dr. Liu's calm, professional voice implied that Robbie should be calm as well. "They're coming down the tube."

Their in-system pilot, Robbie McPherson, was a veteran of the Kohlite Marines and not easily shaken.

Emily forced her legs out of her padded sleeping web and told her dispenser she wanted coffee, but her words were still too slurred.

"C-O-F-F-E-E," Emily spelled out in irritation. She had to get fully awake.

"I'm up, Doc, I'm up," Emily muttered. With fingers that felt like sausages, she punched in the sequence to let medical know she was awake and relatively alert.

As soon as she could trust herself to stand, she pulled on a coverall and deck boots and propelled herself down the zero-gravity tube to the bridge.

Leon has to be all right.

The bridge bustled with activity, Jen already at the debris scanner, checking for hazards, Carmen impatiently waiting for her boards to come online, and Jake dragging himself into his captain's chair, grumpy as usual right after waking.

"Darn it, Harv, get the man unstrapped and get him out of here!" Jake growled at the medic leaning over Leon's chair. "Robbie won't be able to concentrate until he's secured."

"Not moving him 'til I'm sure there's no spinal damage," Harvey shot back, a little less composed than usual. "Don't care if you're the freaking President of the Universe; so help me, I'm not!"

Emily crept around the perimeter of the bridge to the pilot's chair. Leon slumped unconscious in his harness webbing, his head lolled over on his left shoulder.

"Harv, what happened?" She kept her voice low, not wanting to upset Robbie any further.

"Hey there, Miss Em." Harvey smiled for her. "Looks like exhaustion. From what I hear, that was the longest single jump Leon's ever done. Maybe the longest anyone's ever done. He managed to set the in-system auto, got Robbie's wake cycle started, and then he collapsed." He unhooked the tubes that kept Leon awake and alive during jump flight. "He'll be all right, Miss Em, don't worry. You wanna start undoing his straps for me? Then we'll get him on the stretcher and down to Doc, and we'll take good care of him."

Emily took her place at her console after Leon, whose face was as pale as his fine, blond hair, had been taken away by the medics. No rush. Her work began when they were closer to the target planet. If this one had no sentient life like the previous three planets the Venture had visited, she wouldn't have any work at all. She increased her screen magnification to get her first glimpse. The planet did look promising—blue that was most likely water, cloud vapor of some sort, icecaps. It was possible this time.

Her job was to advise the corporation of any possible intercultural difficulties or of potential hazards or legal issues if a sentient population inhabited the mining site. Some populations, such as the Xinj groups of the Vegan system, rated over three hundred on the xenophobe scale, not surprising since they tended to eat visiting corporate representatives. Universal Trade Commission regulations forbade contact with any group that scored a rating higher than two hundred.

Other groups required special handling, such as the Fenlis, whose rules of protocol were so complex, they could become offended and hostile if a representative wore the wrong shoes to a meeting. It was Professor Emily Nandi's responsibility as the Montagna Mining Corporation's xeno-anthropologist to safeguard the corporation from costly and potentially deadly negotiating blunders. It was also her obligation as the company's Universal Trade Commission observer to advise whether a new population rated high enough on the scale to pose a hazard to outsiders or whether a culture was too delicate for contact.

"I think we've got a live one, Em," Sri Patel said from her left. The little biologist's eyes gleamed with excitement.

"You sound so sure." Emily laughed. The last three planets had been dead worlds without even a particularly smart microbe to study.

"Dunno yet. Just going to set up here and then head down to medical to check." Emily's forehead wrinkled. "Harv thinks it's just exhaustion."

"Just exhaustion? What he really means is the big guy almost killed himself getting us here. Jake pushes him too hard."

"He pushes himself too hard," Emily retorted. "He was muttering something about passing Tiff Holloway's jump record before he strapped in last."

"Professor Nandi?" One of the techs was at her elbow. "How do you want the remotes set?"

"Let's wait on that, Brian, see what we have here first," Emily murmured. The title of professor still sounded odd to her. Just two years out of the university, she sometimes wondered whether she'd made a mistake. Maybe she should have stayed a little longer, doing research on Earth's urban subcultures, gathering more experience, but the real research was out here.

When the MMC had requested a certified xeno-anthropologist, she had jumped at the chance. Alien cultures, human cultural shifts, a chance at some genuine field experience; this was what she couldn't get on Earth. The human world of origin was one huge, sprawling city with no rural economic systems, no pre-technological cultures, and few unexpected variations or anomalies.

With her scanners set to detect possible population centers, she had nothing to do over the next two hours besides watching Robbie ease the Venture through deceleration in preparation for orbit. Emily unhooked from her console and floated back down the tube to medical.

Dr. Liu, slim, delicately built, and usually frowning in concentration, was at her central console, bringing the last few crewmembers up out of jump sleep and completing the wake cycle rosters.

"Professor Nandi." She greeted Emily with a nod. Even though Jake insisted this was a 'friendly' company and executives and professional staff should be on a first-name basis, Dr. Liu had never been comfortable with informalities. "I assume you're here to ask after our pilot. He's resting. His collapse was due entirely to stress and fatigue, not to injury. In relative time, he spent nearly fifty hours piloting through the jump currents."

Emily sucked in a breath. "Fifty? I thought twelve was supposed to be the limit."

"Twelve is the limit recommended by most physicians." Dr. Liu snorted. "But who listens to mere doctors? You may visit with him for a moment."

Leon lay stretched out on his back on one of the barris gel units. Wonderful things, they conformed to the body, supporting and supplying warmth, hugging the patient firmly and providing a cushion against sudden jolts or changes in the ship's velocity. Emily often wished she had one to sleep in all the time. The one cradling Leon was pulled over top of him as well, covering him to mid-chest, a sign his body temperature had dropped. His blue eyes were open, dazed, and lackluster.

"Hey, bud," Emily ventured, leaning against the gel unit next to his. "How's it going?"

"Hey, Em," he replied, clearing his throat a few times before continuing. "Sorry I wasn't there for you today."

"That's okay. This time, I was there for you." She cocked her head to one side. "Dr. Liu seems to think you almost killed yourself."
Leon gave her a lazy, crooked smile. "But I broke the record by twelve hours. Don't be mad, Em, congratulate me."

"So now you go in the pilot guild records as the stubbornest FTL pilot ever. Was that so important?" she shot back.

"It's not just the record, Em." The impudent smile faded. "My ranking goes up. I can get better fees, and one of the big freight lines or even a passenger service might pick up my contract and get me out of here."

"I didn't know you wanted to leave. Aren't you happy with the company? With the work?"

"Work's fine," he said around a yawn. "But some of Jake's policies are starting to bug me."

"Sirius Four?" she asked, but she understood.

Emily had advised the corporate board the inhabitants might be pre-sentient and shouldn't be disturbed, but the huge titanium deposits on the planet had proved too tempting. Jake insisted on classifying the inhabitants as animals and had ordered the 'crabbies' forcibly relocated so the strip miners could move in. Many of the crustacean-like natives had died during resettlement. The new habitat lacked the right climate or food supplies for them, and Leon had been upset. He had confided to Emily he felt responsible for the deaths because he had brought the Venture to the system. Jake reassured everyone the ecology and the crabby population would re-stabilize after the mining operation was complete. He was probably right. Jake did have decades of experience in deep-space exploration and planetary surveys, while she was a raw beginner.